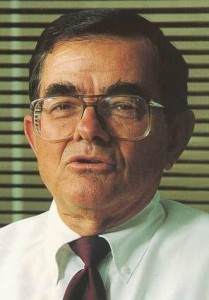 Rex McKinney is widely recognized as an innovator and a leader whose influence on the U.S. cotton industry will not be soon forgotten. His willingness to lend a helping hand to any gin in a time of need parallels his goal of continually promoting service.

“Rex is someone who goes above and beyond the call of duty. He always wants to do more for the producers by helping in every aspect of the ginning process,” says Dan Martin, former manager of Field Services at Plains Cotton Cooperative Association. “He may appear to be low profile, but he’s one of the smartest men in the industry.”

After serving as president and manager of Farmers Cooperative Compress (FCC) since 1973, McKinney retires this summer. His innovative methods throughout the years made the compress highly efficient, and today it is the world’s largest inland cotton storage warehouse that can break out and load up to 12,000 bales of cotton per day. Throughout his 44 years of experience, McKinney has witnessed and instigated many changes at FCC and in the cotton industry.

McKinney became a full-time employee in 1953 and watched as FCC went from a cotton yard to a warehouse operation. He saw tremendous growth as buildings were constructed to meet the demands of farmers using Commodity Credit Corporation loans.

When cotton was ginned as flat bales, warehouses were responsible for compressing bales to standard density with a 28-inch width as required by U.S. mills or a high density 20-inch width necessary for a steamship to transport cotton to a foreign mill. In the early 1970s, McKinney was a leader in the movement toward universal density (UD) compression, which was a compromise width of 24 inches. U.S. and foreign mills agreed to the adjusted compression, and by approximately 1973 UD presses were being installed at gins, making compression at the warehouse unnecessary.

“UD presses at the gin allowed for a greater storage capacity at the warehouse and made the delivery of cotton faster,” McKinney says. “All gins associated with FCC now utilize UD presses.”

Another change McKinney credits for shaping the industry is the current moduling system that began in the 1970s. It has revolutionized the concept of harvesting and immediately delivering the cotton to the closest gin. With the module builder, producers are able to leave seed cotton in the field and deliver it later to a gin of their choice.

“The moduling system made the idea of a neighborhood gin diminish. Now there are fewer, larger gins growers can use,” McKinney explains, and greater volume usually results in lower ginning costs.

McKinney has seen the cotton industry endure many challenges, but he feels overcoming the reputation that West Texas produces low quality cotton has been one of the greatest.

“In 1983, farmers began funding, through the Plains Cotton Improvement Program, 10 cents a bale for seed breeding to improve cotton quality, and through the years quality has improved tremendously,” McKinney says. “Producers in West Texas can no longer be accused of growing poor quality cotton because we have quality cotton that textile mills recognize and use.”

For the future, McKinney predicts a growth in coop volume and believes many acres currently in CRP will be placed in crops such as cotton. More farmers will choose to grow cotton since it takes less water, he adds.

“The only negative I foresee is the boll weevil. We need to find ways for organized boll weevil control, but the key is that growers must agree on a particular method,” McKinney comments.

McKinney has been involved in various leadership roles and received many awards for his past contributions to the industry.

One of McKinney’s greatest attributes is in the area of financial accomplishments. The financial strength of the compress and the returns it has paid back to nearly 10,000 producer-members has been phenomenal.

“I have never understood how a grower could fail to take advantage of a coop situation where he receives all of the savings,” McKinney says. “A grower has the opportunity to really take control of a coop and receive the benefits.”

With the changes and challenges, the cotton industry has survived and thrived, in part, because of managers like Rex McKinney. There are more producers and coops still in business today because of this coop leader.

“It’s been enjoyable to work for the cotton growers. They are good people to work for, but now I plan to do nothing, and I won’t start that until noon everyday,” McKinney adds with a laugh.