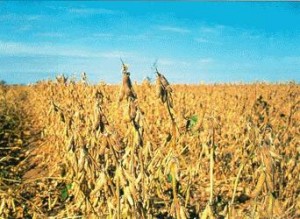 Higher soybean prices and delayed cotton planting in South Texas and the Delta may result in fewer total U.S. cotton acres in 1997. Photo by John Johnson

The cotton market has begun to shift its focus to the 1997 crop as supplies of old-crop cotton available for sale dwindle to low levels, and at this time, there is plenty of intrigue to capture and hold attention.

USDA’s first planting intentions report for the 1997 crop, released March 31, surprised most market analysts and was construed as bearish. The department of agriculture estimated U.S. cotton producers will plant 14.49 million acres this year based on conditions as of March 1, slightly lower than last year’s 14.67 million.

Ahead of the government report, private analysts surveyed by Bridge News pegged plantings at an average of 13.89 million acres. Most analysts at the time cited higher grain prices that would persuade growers, particularly in the Delta, to plant more soybeans and corn. They noted that since the end of January soybeans had gained approximately 50 cents per bushel and corn 20 cents while cotton had lost almost four cents per pound.

Other analysts added that soybeans and corn are less risky and less expensive to plant, compared to cotton, and many growers believe these grain crops will produce better profits. Also, some banks reportedly are more willing to lend money to growers who plant less risky crops, a development that could persuade them to opt for grains this year.

Meanwhile, other analysts believe any shortfalls in the Delta may be offset by higher acreage in Texas. The states’ growers planted 5.7 million acres last year and possibly could plant more in 1997; however, the 1997 planting season in South Texas has been less than ideal thus far.

Heavy rains from the Lower Rio Grande Valley (LRGV) to the Upper Coastal Bend have delayed planting significantly and, in some areas, washed away seed that had already been planted. The situation has some growers contemplating switching to soybeans.

LRGV growers were expected to plant between 200,000 and 300,000 acres in cotton this year, according to a cotton marketing specialist at Texas A & M University. But, by early April those figures were in doubt as producers faced planting deadlines for crop insurance and boll weevil control. As a result, higher soybean prices were making that crop more attractive for some growers.

The scenario was much the same in the Upper Coastal Bend where waterlogged fields were posing serious problems. Although farmers there could still plant cotton until the end of April, some crop watchers were noting considerable talk about soybeans as an alternative.

Heavy rains the first week of April in the Corpus Christi area halted cotton planting that was estimated to be 50 percent complete at the time. The rains caused widespread flooding, almost certainly forcing replanting of some fields.

Market watchers also will continue to monitor conditions in West Texas where early spring rains have left much of the region in the best condition seen in several years. A recent survey of cooperative gins in the region indicates growers will plant approximately 60,000 acres more than last year.

Thus, the U.S. cotton market may have correctly targeted West Texas as the trump card when final planted acreage figures are dealt. And when wide swings in Texas’ annual per-acre yields are figured into the equation, they could result in a variability of hundreds of thousands of bales based on the 5.9 million planted acres that are currently projected by USDA.