From the opening to the closing gavel of the 75th Texas Legislature, a small but influential group of men and women will work countless hours to protect the interests of Texas agriculture, the state’s second largest industry. Gathering as an informal coalition called the Texas Agricultural Council, the group is counted upon by farmers, ranchers and agribusinesses from throughout the state as well as many state legislators for their expertise and knowledge. Yet, few have ever heard of the group.

“The number of lawmakers from rural areas has dropped steadily over the years,” says Speaker of the House Pete Laney from Hale Center. “Nearly half of the members of the Texas House come from six of the state’s 254 counties.” With some exceptions, most legislators today no longer have a direct link to agriculture, (see related story on page 15), notes the three-term speaker and 24- year veteran of the Legislature.

“For example, many of the tax exemptions enjoyed by Texas agriculture today were written many years ago by legislators who were from rural areas. Therefore, members of the agricultural council must work harder than most to educate our representatives and help them become experts on ag issues,” Laney adds.

It is that challenge offered by Speaker Laney that motivates and excites members of the council who met in late January to review and discuss bills already introduced for this legislative session, as well as bills that are anticipated, and to formulate strategy. It is a methodical approach in a professional atmosphere of cooperation. After all, a lot is at stake.

“We must approach all legislative and regulatory issues in this manner,” explains Tom Engelke, executive vice president of the Texas Agricultural Cooperative Council (TACC) which represents most of the state’s agricultural and utility coops. “We cannot afford to let emotions get in the way of successfully defending our organizations’ interests.”.

At their late-January meeting, council members carefully reviewed a “tracking sheet” of bills that could have a direct or indirect impact on agriculture. Specific assignments were handed out based on individual council members’ interest in or expertise related to certain bills. Their work was just beginning.

First up for discussion was the anticipated property tax relief bill which was announced less than a week later by Governor George W. Bush during his State of the State address to the Legislature. The ambitious plan is designed to cut the average Texas homeowner’s school property tax by 40 percent, or $3 billion a year state-wide, and provide a fairer way to tax businesses. It is the prospect of new or higher taxes on business activities that concerns many agricultural interests.

“There’ll be winners and losers for all segments of the state based on our understanding of the proposed bill at this time,” Engelke explained in late January. “The business activity tax will be levied on profits, labor and appreciation which means labor-intensive businesses will be hit hard. At first glance, this component of the bill was cause for serious concern, especially for Texas cooperatives,” says Engelke. “But, after further study, we discovered current language in the bill exempts agricultural, electric and telephone coops from the business activity tax.” Engelke and others will work to maintain the exemption as the bill makes its way through the Legislature. 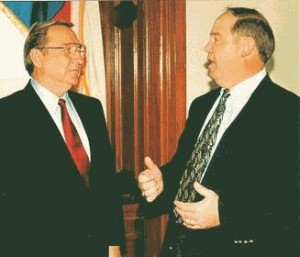 Another positive side of the tax bill is an exemption of business inventory from school taxes; an exemption that offers significant consequences for cotton coops. For example, cotton stored in warehouses or awaiting certification at the Port of Houston more than 175 days currently has been subject to inventory taxes. Exempting such inventory from taxation will have a direct impact on cotton farmers’ bottom line.

The “tracking sheet” reviewed by the council at its first meeting of the legislative session in late January contained 68 bills that had been filed or introduced, and that list will continue to grow to approximately 300 bills until the session ends. Among the key bills and issues at the time were: the Right-to-Farm Act; Environmental Audits; Property Rights; the Right-To-Know Law; and Rule of Capture or Right of Capture which will be directly affected by a new Water Bill introduced in the state Senate (see related story).

The Right-to-Farm Act currently says if a city moves out and surrounds a farm,the farm operator has a right to continue farming as long as no harm comes to neighbors unless the operator decides to engage in another form of agriculture, in which case the operator would be out of compliance. A new bill introduced by Representative David Swinford of Dumas would expand the act to allow a farmer to continue an agricultural operation in any commodity.

With regard to property rights, current state law says land owners must be compensated if a “takings” is determined, but cities and counties were exempted from the mandate. However, counties will no longer be exempt as of September 1 of this year. As a result, county governments are expected to work hard to maintain their exemption beyond the September 1 cutoff.

Texas law regarding restrictions and recordkeeping of farm chemical use, often referred to as Right-to-Know, is more stringent than federal law, and agricultural interests will attempt to reform the regulations. The question is can they overcome the formidable environmental lobby in Austin.

Rising to meet these and many other challenges is a small but dedicated group of individuals who, collectively, work quietly to ensure continued vitality of all segments of Texas’ agricultural industry. Their impact will be felt directly by farmers, ranchers and agribusiness as well as local economies throughout the state.