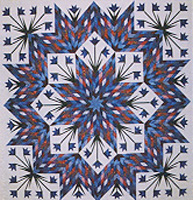 Darlene Collins of Dimmitt, Texas, traveled to Portland, Ore., in the fall of 1996 with her husband and had an opportunity to “explore” a museum bookstore in search of a historical quilting book. The book she discovered described quilters from towns within 50 miles of Dimmitt.

Collins returned home and spoke to fellow quilters in the area, and they decided the Ogallala Quilter’s Society would be born. In February 1997, the eight founding members each donated 10 dollars to start the organization. 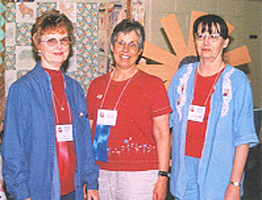 Since 1997, more than 300 members have joined the Society now headquartered in Dimmitt, and the annual quilt festival is held there every April.

The quilt festival is a three-day event filled with competition, banquets and quilting classes. In recent years, instructors from Texas, Arizona and Arkansas have attended the festival to teach quilting classes.

The festival is supported in part by a grant from the Texas Commission on the Arts. Sandra J. Sims, chairman of the quilt show from Amarillo, Texas, also credits the community of Dimmitt for its support.

“If Dimmitt didn’t support the festival and show on such a large scale,” Sims said, “it would be difficult for the Ogallala Society to accomplish its goals.” 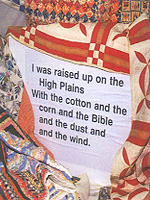 Collection of vintage quilts on display.

According to a survey conducted by Quilting in America, there are more than 19 million quilters in the United States. It is estimated that an average quilter spends approximately $600 annually on cotton products and buys more than 95 yards of cotton fabric.

“The amount of dollars that the quilting industry pours into the cotton industry needs to be told,” Bowman said. “A lot of citizens in our area do not realize what impact the cotton industry has on our economy and how much cotton is used in quilt making and sewing.”

Ann Powell, vice president of the Ogallala Quilters Society from Canyon, Texas, said many quilters use a cotton-blend batting because it is soft when washed. She also said the preferred fabric for most quilters is cotton. 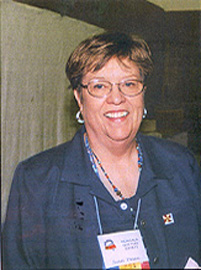 “Cotton is a great fabric because it doesn’t ball up, it feels good, it holds a crease and it’s comfortable to sleep under,” Powell said.

Jean Dean, Midland, Texas, is the president of the Ogallala Quilters Society and is one of the eight founding members. Dean has a long-time connection with quilting and cotton production, and she prefers to use cotton material in her quilts.

“We use cotton batting because it sticks, it grips,” Dean said. “It’s smoother, and it has more of an old-fashioned feel about it.” Among the many awards presented at the festival is the Cotton Boll award.

“Our major award for excellence is the Cotton Boll award,” Dean said. The Cotton Boll is awarded to four winning quilts. Awards are given to best machine quilt, best hand-quilted quilt, most creative quilt, and best use of color in a quilt.

Dean and the other members of the Ogallala Quilters Society are dedicated to teaching the art of quilting, preserving their quilting heritage and encouraging higher standards of design, color and workmanship in quilting.

“Quilts tell our history, they are great historical documents,” Dean said. “If someone gives you a quilt, it’s because they love you.”

For more information on quilting and the Ogallala Quilters Society, visit their Web site at www.OgallalaQuilters.org.