Oklahoma Cooperative Manager of the Year 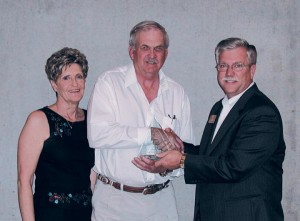 John Berg (right), president and CEO of Triangle Cooperative Service Company, presents Mike Berry with the Oklahoma Cooperative Manager of the Year Award. Berry was accompanied by his wife Chick.

Triangle is a regional insurance and member services cooperative founded in 1916 by local agricultural cooperatives in Oklahoma. The company now provides insurance in Texas, Arkansas, Louisiana, Mississippi, Wisconsin, Nebraska, Iowa, and Colorado. It has presented the prestigious award since 1970.

The 2005 cotton crop produced a record volume for Altus Cotton Growers, yielding 87,982 bales compared to the previous year when approximately 76,000 bales were ginned.

A third generation ginner, Berry serves on the boards of directors for the National Cotton Council (NCC) and the Oklahoma Cotton Council. He also served on the NCC Bale Packaging Committee for seven years.

“To be selected by your peers for the Oklahoma Cooperative Manager of the Year is a great honor,” Berry said.