Technology, like time, marches onward, and mainframe computers are becoming obsolete, inefficient or cost-prohibitive for many functions. Accordingly, PCCA is in transition to migrate all systems, including Gin Bookkeeping (GBK), away from the cooperative’s mainframe. 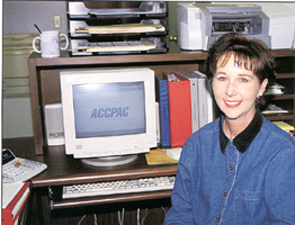 “SBT is generations ahead of our current GBK system because of the ‘point and click,’ Windows-based menus,” says Eric Wanjura, PCCA Gin Bookkeeping supervisor. “There are no slash (/) codes to enter as with GBK.”

According to Joe Tubb, PCCA vice president of Information Systems, the coop’s programmers wrote the text-based GBK system in 1978. Since then, there have been a few additions and changes but no major updates.

When PCCA’s GBK and programming staff decided it was time to update the GBK system, they had to decide between writing their own bookkeeping system or purchasing one from the marketplace. The staff chose to purchase an already established program from the market because the operations needed in the program were not cotton specific. Also, it was cheaper to buy from the market, and it would be one less system the programming department would have to re-write in order to achieve the long-term goal of getting all programs off the mainframe. The SBT program was chosen based on four main criteria: functionality, software flexibility, Intel platform/server based, and cost.

Functionality was an issue because staff wanted the conversion to go smoothly for the gins and the training to be as simple as possible. They also wanted the ease of generating reports and the ability to maintain backup files for the gins. Software flexibility was an issue because they wanted the ability to customize and re-write certain parts of the SBT program to accommodate PCCA- affiliated gins.

With those criteria in mind, PCCA narrowed the five possible programs down to two. The final, deciding factors were the ability of PCCA to own the programming code for SBT and be able to make programming changes like the addition of scale ticket and patronage functions. The other deciding factor was the fact that the SBT program was only 20 percent the cost of the competing program.

When selecting gins to participate in the SBT pilot project, PCCA looked for gins with diverse characteristics and responsibilities. Some of the participating gins are strictly ginning facilities while others include farm supply and fuel in their operations. Also, bookkeeping staff experience varied as well as the location of the gins. Gins participating in the SBT pilot project are: Lubbock Cotton Growers, Slaton Coop Gin, Petersburg Coop Gin, Roscoe Coop Gin, Miles Coop Gin, Stamford Farmers Coop, Jayton Farmers Coop, Farmers Coop of Eldorado, and Altus Cotton Growers.

Dean Church, PCCA’s vice president of Grower Services says, “The participating gins did not realize the amount of time and work this project would take. They have done an outstanding job of helping make this transition a success.”

Michele Hopp, bookkeeper at Lubbock Cotton Growers, said it was hard to focus on learning SBT and getting out of the habit and repetitiveness of GBK. “We have crossed a few hurdles along the way, but now I am looking forward to using SBT in the future,” says Hopp. A favorite feature for Hopp is in the accounts receivable part of the system. The ability to post and update information in prior and future months is a bonus in the new system, Hopp says. 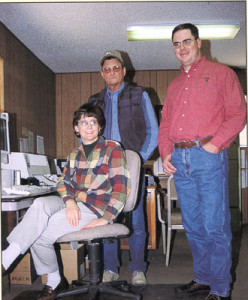 According to Wanjura, SBT adds significant functionality and enhancements in accounts receivable, accounts payable, inventory, and payroll as compared to the GBK system.

“This has been a work in progress,” Wanjura said, “We have been working with the pilot gins making modifications and enhancements along the way.” Roscoe Coop Gin has had a positive experience with the SBT pilot project.

“The best feature on the new SBT program is the reports,” says Office Manager Sabrina Bishop. “I may have to enter a little more information into the system, but I receive much more detailed information,” she adds.

Bishop said that the conversion from GBK to SBT was smooth. The PCCA programming department wrote a conversion program in order to import much of the data from GBK to SBT; therefore, no re-entry was required for employee information, payroll records, accounts payable and accounts receivable.

Bishop says that once she took the time to look at each of the different reports and screens, the new program was much easier than the old, and with the help of Danny Helms, PCCA’s Rolling Plains field representative, it took only a day or two to learn the basic operations of SBT. She also says SBT has worked for all operations at the gin. Roscoe Coop also operates a store and fuel service.

“Overall, the new SBT program is better because it has much more flexibility, and it is easier to operate,” she adds.

Vickie Davis of Farmers Coop Association in Eldorado, Okla., says the conversion to SBT was a little confusing at first. However, with the help of Wanjura, Todd Straley, GBK field representative and Randy Squires, PCCA’s Oklahoma field representative, the problems were fixed in no time. Despite the few complications, it did not take Davis long to find her favorite function of the new program.

“The reports are better, and the information in them is more meaningful,” she says. Slaton Coop Gin Bookkeeper, Jacque Davidson also is enjoying the new SBT program.

“This new program is such a time saver. Before, I had to hand-write checks and then post them into GBK. With SBT, I simply enter the information, and it prints the check for me.” Davidson says the new program has been a success because of the “wonderful PCCA staff” with whom she has worked.

“They have put a lot of time and hard work into this pilot project, and it shows,” she adds. After working with SBT for only a few months, Davidson says she would be upset “if they should take it away from me now.”

Wanjura concludes, “Gins have been requesting an updated system for a long time. Many local coop operations have become more complex and need a more comprehensive package in order to handle their bookkeeping needs. I think the GBK and programming staff have found the answer with the new SBT system.” And, PCCA is one step closer to eliminating the mainframe computer.