Keeping the Water Flowing for a Half Century 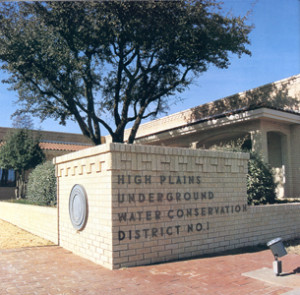 The largest and oldest water conservation district of its kind in the country this year celebrated 50 years of existence. The High Plains Underground Water Conservation District No. 1 held an open house on September 11, 2001, and more than 100 guests gathered to commemorate the landmark anniversary and recall past events in the district’s rich history.

Based in Lubbock, Texas, the district consists of 15 counties and currently covers 10,728 square miles. The 15 counties include all of Bailey, Cochran, Hale, Lubbock, Lynn and Parmer and portions of Armstrong, Castro, Crosby, Deaf Smith, Floyd, Hockley, Lamb, Potter and Randall.

In 1951, residents in 13 Southern High Plains counties voted to establish a water district in an effort to protect the ground water rights of landowners. Since then, the district grew to 15 counties as a result of several annexation elections. Its goal is to conserve, preserve and protect the limited ground water supplies of the Ogallala Aquifer beneath the 15 counties.

Approximately 95 percent of the ground water used within the district is for agricultural use. In a new publication titled 50 Years of Water Conservation, the district shares stories of its creation, its history and past conservation efforts.

For five decades, the district has taken a “neighbor helping neighbor” approach in implementing water conservation programs and activities. This approach has enabled the district to form a strong partnership with farmers in the area.

Beginning with a 1957 initiative to prevent salt water contamination of the aquifer, a district rule was adopted to eliminate unlined oilfield brine pits within district boundaries, and it was only the first of many conservation programs to follow. The district went on to promote playa lake modification, mobile field water conservation labs and the use of many irrigation processes including LEPA (Low Energy Precision Application) pivot systems and drip irrigation. In 50 years, water losses within the district due to inefficient irrigation practices and irrigation tailwater have been reduced significantly.

Early on, employees of the district realized that one of the best conservation tools was water-related education in area schools. They immediately targeted elementary and junior high school students and developed educational comic books and textbooks.

Through a program called Learning to be Water Wise, students today learn about the importance of water conservation and ways to save water at home. The district provides each participating student with a kit containing a high- efficiency showerhead, a high-efficiency kitchen faucet aerator, and they are taught to conduct water audits at home.

The district also employs new technologies as they become available. One program it initiated in recent years is precipitation enhancement, also known as cloud seeding. This program was introduced to increase rainfall recharge to the Ogallala Aquifer, and it continues today.

The process involves introduction of a seeding agent such as silver iodide into clouds to provide additional condensation nuclei to stimulate clouds to generate more rainfall than they would produce on their own. This program is updated each year to take advantage of new developments in equipment and technology.

Another program the district implemented in the 1990s was irrigation scheduling using potential evapotranspiration data (PET). According to the district’s publication, 50 Years of Water Conservation, potential evapotranspiration is the amount of water that can be transpired from the leaf area of a plant and evaporated from the soil surrounding the plant. Irrigation scheduling using PET data allows irrigators to save money, conserve the ground water supply and get maximum return from irrigation water applied to fields.

In 1986, 3,352 center pivot sprinklers were in operation within the district. By 1998, that number had increased to 11,287 pivots, an increase of more than 300 percent in 12 years. According to Carmon McCain, the district’s information/education director, LEPA irrigation systems can achieve irrigation application efficiencies of up to 96 percent, a significant improvement from the 50 to 60 percent efficiencies associated with high-pressure, above-line center pivot systems.

“The water district’s most important days are still ahead,” says High Plains Underground Water Conservation District Manager Jim Conkwright as he acknowledges the importance of water conservation measures in the future.