A lifetime of cooperative and cotton industry leadership will open a new chapter in August as Wayne Huffaker, a cotton producer in Lynn County, TX, prepares to lead a delegation to the People’s Republic of China. It is a continuation of the West Texas farmer’s quest for new frontiers of challenge and service to his industry and his fellow man.

Huffaker’s involvement in international exchange began in the late 1980s when he was selected by the U.S. Agency for International Development (USAID) to help teach cooperative principles to rice farmers in the Philippines. Based on his experiences in Plains Cotton Cooperative Association and American Cotton Growers, Huffaker helped organize 23 local cooperatives into a rice marketing, storage and milling coop.

His compassion for and desire to help farmers in third world countries becomes obvious as he shakes his head in disbelief while describing the conditions under which many farmers there obtain operating capital and market their produce. A second trip to the Philippines in 1990, also under the direction of USAID, to help establish a more effective and efficient cooperative cotton gin almost cost Huffaker his life when a heart attack cut short his work there.

Ten years and a heart transplant later, Huffaker is ready to go again. This time, he will lead a delegation of 25 to 30 selected Texas cotton industry professionals to China under the auspices of the People to People Ambassador Program.

“The primary objective of our mission is to foster new working relationships between U.S. and Chinese cotton growers, government agricultural officials, manufacturers and exporters,” Huffaker explains.

The group will depart Los Angeles on August 28 and return September 10. The estimated cost per delegate or accompanying guest is $4,345 (departing from and returning to Los Angeles) and includes transportation, all meetings and activities, accommodations, most meals and substantially all other costs. A three-day extension to visit Hong Kong also is available to delegates. 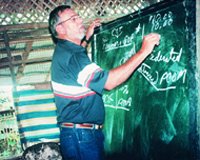 Huffaker diagrams the organization and structure of West Texas cotton cooperatives during a mission to the Philippines.

In Beijing, the delegation will meet with representatives from the Cotton Research Institute, Agricultural Science Academy, Agricultural University of China and Hebei Ji Dai Cotton Seed Technology Company, Ltd. The latter is a joint venture between China and Delta and Pine Land Company.

Other visits in China will include provincial agricultural bureaus, seed distribution and cotton ginning facilities. The delegation also will spend a full day with local cotton farmers to discuss challenges and opportunities for growing cotton in China.

The People to People Ambassador Program was founded in 1956 by President Dwight D. Eisenhower. His perspective as Supreme Allied Commander in World War II and as President led to his belief that private citizens reaching out in friendship to the people of other nations could make a significant contribution to world peace.

The program was administered by the U.S. State Department until 1961, when it became a private, nonprofit organization. International exchanges administered by the program focus on specialized disciplines within the fields of agriculture, medicine, law, business, life science, education, sport and the basic sciences.

“Change is occurring rapidly throughout China, including the cotton industry,” Huffaker explains. “Our visits there will give us a first- hand look at what’s happening and how it will affect U.S. cotton producers for many years to come.”

The upcoming exchange between Texas and Chinese cotton officials will be facilitated by Huffaker’s experienced leadership. One can only wonder where the next chapter in his international quest for greater understanding will be written.