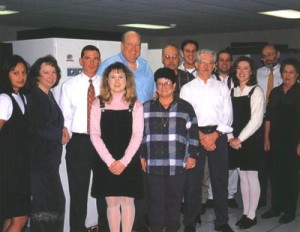 PCCA’s applications and systems programmers worked more than 12,000 hours to ensure the cooperative is Y2K compliant.

The approaching turn of the century has created a widespread fear in people’s minds much like the panic caused by George Orwell’s novel “1984.” With education and forethought, Plains Cotton Cooperative Association (PCCA) currently is preparing its computers to avoid any problems that could arise at the start of the new century, when all computers that are not Year 2000 (Y2K) compatible are expected to shut down.

The Y2K problem started when early programmers attempted to find ways to control the high cost of computer memory. In order to save memory space and money, computers were programmed using two digits, such as 98, to interpret what year it was instead of four digits as in 1998.

The challenge facing computer programmers is that on January 1, 2000, the software and chips embedded in computers that direct them in their operations will interpret the new year, which they will read as 00 to mean it is the year 1900 therefore throwing off calculations and programs.

According to Joe Tubb, PCCA’s vice president of Information Systems, it is not as if computer programmers did not see the problem coming. What is surprising is the number of programs written in the 1970s still in use in corporate America. The cost of making changes to those systems has kept many companies from addressing the problem early on.

PCCA programmers knew that bringing the computers up to standards would be a major undertaking involving more than 10 million lines of Cobol programming code written in-house. In January of 1997, a plan was implemented and a project leader was assigned to ensure that all computers associated with PCCA would be Y2K compliant well before any problems could arise.

With a scheduled completion date of December 31, 1998, so far more than 12,000 hours of work have been logged by the Applications Department, the group responsible for writing programs and placing them on the computer system, on the Y2K project. PCCA’s history of accuracy and thorough record keeping have helped in the implementing of the plan to combat the Y2K problems.

“We’ve utilized programming standards for years, so we knew what to do and how to go about it in an orderly fashion,” Tubb said.

PCCA’s Systems group, the department responsible for connecting all programs together on the computer system, installed a Y2K compliant MVS, or Multiple Virtual Storage, operating system on July 30. Fifty-seven other third party packages, all of which have Y2K compliant software installed, also have been put into place, bringing all software except general ledger and accounts payable up to Y2K standards. The Y2K version of those programs is currently being installed and will be in production in December. TELCOTnet PCs have been tested, and all are Y2K compliant.

While PCCA has direct control over its own computer systems, assuring that all of the vendors that provide service to PCCA, including electricity, are Y2K compliant has required a different and more direct approach.

“It has taken diligence,” Tubb observed, speaking of the process required to see where each vendor stands. He also added that while PCCA has a history of consistent management and longtime programmers, many of the companies PCCA comes in contact with do not have the same standards.

More than 200 letters have been mailed to the different vendors to find out where each company stands in their progress for Y2K compliance, and follow-up letters will soon be sent.

While no one can guarantee how successful their attempts to make systems Y2K compliant will be until the year 2000, PCCA programmers can confidently report that a disaster recovery site has been set up, and software can be reloaded in 48 hours. Overall, for PCCA, the forecast for the year 2000 appears to be smooth sailing.

“While there will be some disruptions and inconveniences, I expect them to be minimal at best over things that we can control,” Tubb said, looking towards the turn of the new century with confidence. “I don’t think there is going to be widespread chaos.”