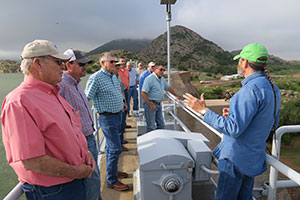 Members of PCCA’s Warehouse Committee, Board of Directors, and employees toured the Lugert Irrigation District in Oklahoma.

Since Plains Cotton Cooperative Association is a member-owned cooperative, there are committees that help oversee operations of each division. The Warehouse Division has a committee of nine members to assist with decision-making. The committee meets quarterly and serves in an advisory capacity to the PCCA Board of Directors on items such as capital expenditures and tariff changes.

“The committee must make sure the division has the proper resources to receive and ship crops, safely and efficiently, that vary drastically in size,” said Jay Cowart, PCCA’s Vice President of Warehouse Operations.

PCCA’s Warehouse Division has locations in Altus, Oklahoma, and Sweetwater, Texas. These are two of the oldest facilities. There also are warehouses in Liberal, Kansas, and Rule and Big Spring, Texas. These facilities have a combined storage capacity of 1.2 million bales. The warehouses carefully store, sort and ship members’ cotton. Maintaining efficiency while performing at industry standards provides additional value to our members and routinely generates strong returns in the form of dividends. The Warehouse Division employs 70 full-time employees and brings in seasonal help as needed.

The committee members held their May meeting in Altus, Oklahoma, to tour PCCA’s Altus Warehouse and look at possible structural and safety improvements for the future. While in Oklahoma, they also had the opportunity to take a tour of the Lugert Irrigation District facilities. This district is a Bureau of Reclamation project that delivers water to about 46,000 acres, and cotton is grown on about 99 percent of these acres.

Tom Buchanan, Lugert Irrigation District Manager, said the lake was started during World War II, and the irrigation district first delivered water in 1946 and has delivered water almost every year since. He said this district solely uses surface water to supply irrigation to producers. The water comes out of the lake and then about 300 miles of ditches and canals are used to deliver the water to farms.

“These acres are the historic base of cotton production in Oklahoma, and they are the acres that have led the state in yield and adoption of technology,” Buchanan said. “There is no groundwater in Jackson or Greer County where this is located. Our groundwater is extremely poor quality so this is the only irrigation source or opportunity for these two counties.”

Buchanan said both the irrigation district and the producers have implemented water savings and are showing a significant achievement of using less water to produce more cotton.

“The landowners have installed about 80 tail- water pits to recycle water. It catches runoff water and pumps it back to the top for them to use it again,” Buchanan said. “Producers have also been converting to subsurface irrigation, and the district has been modernizing our measurement and delivery processes.”

Buchanan said the farmers are in favor of water conservation and improving the district because it is ensuring they will be able to continue to farm in the future.

“We are totally self governed,” Buchanan said. “So in reality when they spend money for an improvement in the irrigation district, they are spending money on their own infrastructure.”