Kansas Cotton Production Could Get a Boost 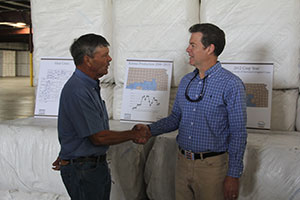 Cotton production in Kansas has the potential to increase significantly in the coming years thanks to a combination of factors. From 1996 through 2012, more than 1 million bales grown in more than 20 counties were ginned in the state, peaking at almost 131,000 bales in 2006. However, acreage and production soon began declining due to damage caused by 2,4-D drift as farmers sought ways to combat glyphosate-resistant weeds on fallow wheat land.

The economic impact was enough to cause some farmers to abandon cotton, but a new formulation for 2,4-D that reduces drift, new cotton varieties resistant to 2,4-D damage, and increased emphasis on water conservation could result in a resurgence in cotton production. The greatest impact may occur in Southwest Kansas where Tom Lahey, a fourth generation farmer, has been using irrigated and dryland cotton in his crop rotation since 2000.
“We started raising cotton when we started losing our irrigation water from the Ogallala (aquifer) in the late ‘90s,” Lahey said. “We raise cotton to increase the value of an inch of irrigation water.”

“Conserving water is the biggest issue for us out here,” added Lahey’s son-in-law, Marcus Howe. “We are trying to plant crops that use less water, and cotton is one of those crops. The biggest sustainability question we have for the future out here is our aquifer.”

The water efficiency of cotton caught the attention of Kansas Governor Sam Brownback when he began developing a 50-year water plan for the state to slow the depletion of the Ogallala aquifer. In fact, cotton uses 50 percent less water than corn and can produce a much higher net return per acre. A study by PCCA staff in 2014 showed an average irrigated cotton yield of 1,250 pounds per acre in Southwest Kansas and a price of 60 cents per pound at that time would produce a net return of $278 per acre. Average irrigated corn yields at the time were 200 bushels per acre, and the price was $4.01 per bushel resulting in a net return of $122 per acre. The convergence of water conservation, new chemistry and new varieties is encouraging for Kansas farmers who grow or want to grow cotton.

“We’ve needed 2,4-D resistant cotton since we started growing the crop,” Lahey said. “In 2013 and 2014, we’d been through a drought, and I think that is why we experienced so much damage on our cotton in those years.” The dry conditions and increased use of 2,4-D are believed to have caused damage to cotton up to five miles away. The 2,4-D resistant variety is from Dow AgroSciences’ Phytogen division and was available on a limited basis this year.

“We are really pleased to have (this variety) available, and I understand that it will be available on a wide basis in 2017, and they will have several more varieties in 2018,” Lahey said. The new 2,4-D chemistry, Enlist Duo, promises to reduce drift when used on fallow wheat land, and Dow AgroSciences is awaiting EPA approval for the herbicide to be sprayed over the top of cotton.

Lahey believes Kansas cotton acreage could explode by 2018 after they see first-hand what the new technology can do. After all, the infrastructure is in place. Kansas farmers have invested $37.3 million in four cotton gins and harvesting equipment since 1996. In addition, PCCA constructed a 100,000-bale capacity warehouse in Liberal, Kansas, to store its Kansas members’ cotton.

“It’s exciting to raise cotton,” Lahey said. “It is a new and different crop. Cotton is a good fit.”