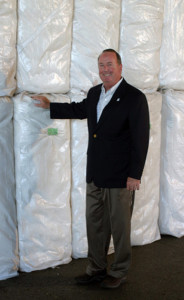 Plains Cotton Cooperative Association (PCCA) President and CEO Wally Darneille recently was elected 2006-07 president of the International Cotton Association (ICA) in Liverpool, England, during the organization’s annual general meeting. He is the first-ever American to serve in that position.

“Wally’s term as ICA president in 2006-07 comes at an important time for PCCA and our members,’ said PCCA Chairman Eddie Smith, a cotton producer from Floydada, Texas. “His service to the organization will increase the visibility of PCCA and our members’ cotton throughout the world textile industry at a time when the volume of our export sales continues to increase,” Smith said.

Darneille was elected to ICA’s Board of Directors in 1997 and served as Chairman of its Rules Committee before becoming First Vice President in December 2005. Formerly known as the Liverpool Cotton Association and established more than 160 years ago, ICA is the world’s foremost cotton association representing almost all cotton growing and consuming countries.

Approximately two-thirds of the world’s cotton exports are traded under ICA rules and arbitration which date back to the dawn of the Industrial Revolution when Liverpool and Manchester were the center of the world’s cotton trade. The rules provide a framework for contracting and for the resolution of disputes.

The annual ICA Dinner continues to be the most important gathering of the world’s cotton community. ICA also provides testing services and conducts seminars in Liverpool and throughout the world regarding trade rules, practices and new developments.