Progreso Coop Gin Manager Mike Yeary leaned over the railing and wistfully stared down at the murky Rio Grande River. For the past seven years, he had managed both the coop and Hidalgo County Irrigation District No. 5, putting him in a unique position to witness the impact of drought and politics on the area’s agriculture industry.

When he looked up and across the river to Mexico, Yeary contemplated the momentous decision he made a week earlier to resign from both jobs and leave the Lower Rio Grande Valley (LRGV) of Texas where he had lived and worked his entire life. As he thought ahead to Oct. 1, when he would become manager of Winter Garden Coop at Batesville, Texas, about 275 miles north of where he stood, Yeary’s face could not conceal his disappointment. Like so many of his coop’s members and other farmers throughout the LRGV, Yeary felt betrayed by Mother Nature and the U.S. government.

“We’ve been in a drought for the past seven to 10 years,” Yeary explained. “Throughout the 1960s, ’70s and ’80s, this area averaged 28 to 36 inches of rain annually, but since then, we’ve received only about 15 inches per year.” Such drought conditions should not be devastating to the entire LRGV due to massive reservoirs up river on the Rio Grande.

Lakes Amistad, north of Del Rio, Texas, and Falcon, south of Laredo, for many years provided life-sustaining water to both farmers and municipalities in the LRGV. However, politics, more than drought, literally has shut off the tap in recent years, and the future of agriculture there is as murky as the Rio Grande itself. 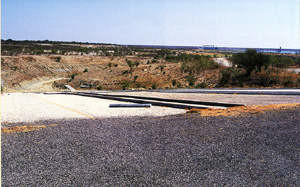 Boat ramps at Falcon Lake on the Rio Grange River are high and dry only a mile from the dam. The reservoir is at less than 25 percent of capacity following 10 years of Mexico’s noncompliance with a 1944 water treaty.

Irrigation managers like Yeary and Jo Jo White of District No. 9 saw it coming 10 years ago. That was when Mexico stopped delivering water to the Rio Grande despite terms of a 1944 treaty with the United States that calls for Mexico to allow 350,000 acre-feet of water to flow annually from a series of reservoirs on the Rio Conchos River Basin in the state of Chihuahua. The water then should flow down the Rio Grande and eventually collect in Lakes Amistad and Falcon.

“We realized as early as 1992 that Mexico was not complying with the treaty,” White said recently, “and thus far, Mexico has accumulated a debt of about 1.7 million acre-feet. An acre-foot is enough water to cover one acre of land to a depth of one foot, about 326,000 gallons. When it became apparent Mexico could not or would not comply with the treaty, White, Yeary and others went to Washington, D.C., and what they learned there was shocking.

“The U.S. State Department under the Clinton Administration was completely unaware of Mexico’s treaty violation because the agency responsible for monitoring compliance had dropped the ball,” White recalled. “We got in their (State Department officials) faces pretty hard, and our Congressman, Solomon Ortiz, and Sentator Kay Bailey Hutchison really went to bat for us. We told the State Department to get out their big clubs and force Mexico to comply with the treaty, but little progress was made.”

In its defense, Mexico has blamed the situation on extraordinary drought and a lack of water it can release to the Rio Grande. Data collected by consultants, universities and others, however, proves differently.

“The figures show that, from 1992 to 1997, the state of Chihuahua received 90 percent of its normal annual rainfall,” White said, “and there was a total aggregate of seven million acre-feet of water remaining in its reservoirs after adding the year-end storage balances together during this timeframe.” Another study found that the last reservoir on the Rio Conchos before it joins the Rio Grande was storing water in its flood pool three of those five years. Thus, due to the ample water available, delivery of 350,000 acre-feet each year, about 5 percent of the water in Chihuahua’s reservoirs, should not have been a problem.

“Obviously, drought has not been the culprit,” White added. Texas Agriculture Commissioner Susan Combs in May referred to additional evidence. 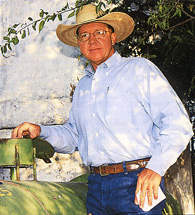 “Satellite imagery shows conclusively that Mexico has had the water to comply with the treaty on numerous occasions but has chosen instead to keep water for their own purposes,” Combs said. She also noted the satellite images indicate acreage continues to be irrigated in the Rio Conchos basin. Meanwhile, the entire LRGV continues to suffer.

Texas Governor Rick Perry and Combs both have estimated the overall economic loss for the region at $1 billion since 1992. This includes lost wages, rents, interest, profits and other net income along with 30,000 jobs lost during the 10-year period. LRGV farmers’ counterparts across the border in the state of Tamaulipas also have suffered from the shortage of water.

It seems as though Mexico has no effective, interior water management plan as Chihuahua’s farmers have switched from crops such as cotton and grain sorghum to more water-intensive commodities such as vegetables and pecans. By 1997, it appeared Mexico was gambling on a hurricane to fill Amistad and Falcon and relieve the country of its water debt as specified by the 1944 treaty. The gamble failed, and politics now has come into play.

“On paper, Mexico’s federal government has control of the country’s water,” White explained, “but in reality, it doesn’t.” It seems LRGV farmers are being squeezed between a fight for political power in Mexico and a lack of resolve in Washington.

Mexican President Vicente Fox’s popularity has waned since his surprising election in 2000 when he unseated the Institutional Revolutionary Party (PRI) whose presidential candidates had won every election for decades. Coincidentally, Chihuahua’s Governor Patricio Martinez, sometimes described by the media as a maverick and combative, is a member of the PRI and reportedly has presidential aspirations.

A story that appeared in the May 24 edition of the New York Times quoted Martinez as saying, “We don’t have any water.” The Times also reported Martinez “has defied Fox and American visitors……. by saying that his state’s waters are sovereign—treaty or no treaty.” Such rhetoric makes it clear that President Fox faces a huge internal dilemma. 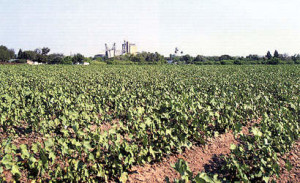 A month later, Martinez sounded more conciliatory following a private meeting with Governor Perry at the XX Border Governors Conference in Phoenix. According to a news release from Perry’s office, Martinez said, “As neighbors, we understand your problem. We will work together.” However, the friendlier tone should not obscure the fact that the water dispute ultimately is a federal issue for both countries.

Initially, the election of George W. Bush as president in 2000 may have provided hope to LRGV farmers and irrigation officials. All were aware that Bush and Fox enjoyed a good relationship, but hopes soon were dashed by continued inaction.

Further infuriating Texas officials who called it blackmail, was a recent request from President Fox for a $420 million loan from the United States to improve Mexico’s water systems and repay its water debt. Governor Perry and Commissioner Combs quickly urged President Bush to deny the request.

In a letter to Treasury Secretary Paul O’Neill, Combs said, “Funding for this project while Mexico remains delinquent in meeting its obligation to provide….water is an affront to the hardworking farmers in the Rio Grande Valley who have seen their lives and livelihoods devastated by Mexico’s indifference to complying with the terms of the treaty.” She added, “I urge you to insist that Mexico comply in full with all provisions of the treaty before any sums are expended in Chihuahua.”

“The State Department has told us it has the power to force Mexico to comply with the 1944 treaty,” White said, “but the department continues to receive no direction from the White House on this issue.” It has left White and others bitter and disheartened.

The dissatisfaction was apparent in late May when dozens of farmers used their tractors to block the international bridge between Pharr, Texas, and the Mexican city of Reynosa to draw attention to their plight. The demonstration came one day after members of Congress from South Texas called for sanctions against Mexico unless it immediately delivered 290,000 acre-feet of water. A month later, officials announced an agreement to release a much smaller volume, and Governor Perry called it a good first step. 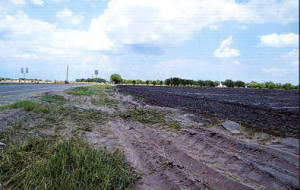 Roadside ditches filled with wind-blown soil are seldom seen in the LRGV, but persistent drought has increased erosion.

“Today’s announcement is one step, one show of good faith,” Perry said on June 28. “But Mexico must now take the next step which is to commit to a regular schedule of water releases,” he added. Commissioner Combs, however, called it a “bad deal for Texas and an insult to the agricultural producers and all the citizens of the Rio Grande Valley.”

“What the agreement boils down to is merely a ‘contingency assignment’ of 90,000 acre-feet from the Amistad and Falcon reservoirs and is a conditional payment on Mexico’s debt,” Combs said. “If you take a look at the conditions, once again Texas and the Rio Grande Valley come up high and dry,” she added. “The payment is contingent on whether the 90,000 acre-feet is offset by water flowing from Mexican rivers into Amistad and Falcon by Oct. 26, 2002.” Once again, the eyes of South Texas turned to Washington.

“I feel let down by President Bush, and I no longer have any faith in our government to have the intestinal fortitude to do what’s right,” Jo Jo White added. “It’s a shame that Washington is willing to sacrifice this area of Texas for the sake of foreign relations or any other reason.”

Mike Yeary almost certainly would agree with White. After all, he has decided to leave the LRGV and the fight he has helped lead on behalf of its farmers for seven years.

“There’s no future here,” said Yeary as he talked about his move to Batesville, Texas, where farmers pump their irrigation water from the ground rather than reservoirs dependent on Mexico.