By Valerie Flattmann and John Johnson 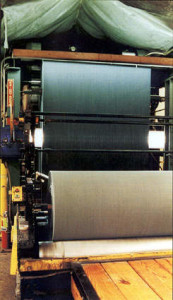 Business is much better for PCCA‘s Textile Division, at least as far as sales volume is concerned. Although fabric prices remain low, they are improved from the second quarter, and the coop’s denim operations continue to run at full production capacity.

The market’s momentum has been boosted by a number of key factors. First, the 2001 holiday season for retail outlets literally emptied the denim “pipeline,” sending U.S. apparel companies scurrying to restock store shelves. Those companies also are buying more domestic-made products as import quotas are approaching their limit for the year. Finally, a rationalization of supply resulting from U.S. denim plant closings in recent years has brought more attention to PCCA’s fabric.

“We’re the first U.S. supplier to deliver the flat finish to Levi’s, and it has resulted in significant orders from them for the third quarter,” Lindsey says. “This new product will have a major impact because it is a value added style that we make for them.” Obviously, Levi’s business is showing some signs of improvement.

After more than five years of declining sales, the venerable apparel company reported good performance against several key financial measures during the second quarter of 2002. Some observers now believe Levi’s may meet its previously stated financial goals for the full year.

“Levi’s must do something and do a strong something,” consultant Andy Jassin of New York-based Jassin-O’Rourke Group told Women’s Wear Daily for its June 12 issue. “Very few companies have ever lived as long as Levi’s without having to re-identify themselves,” he said.

Robert Hanson, president of Levi’s brand in the United States, has challenged his division to become the leading innovator in the denim industry. As a result, Levi’s recently unveiled its new Type One jeans in New York for the spring 2003 season.

Featuring curved seams on the jeans’ hip pockets, Hanson believes the concept will “revolutionize the look of denim on the street.” The Levi’s executive expects sales of Type One jeans will hit the $200 million mark by 2004.

Gap, Inc., one of PCCA’s other major denim customers, appears to be taking a different approach to turn around its retail business by emphasizing straightforward “modern classic” styles designed to appeal to a larger age group.

“It’s no secret that we lost our focus,” Rebecca Weill, Gap spokesperson, told Women’s Wear Daily in June. “Last fall, we went a little too young and trendy and lost sight of who we were. We’re going back to our roots of targeting a very broad customer base; going forward, we’ll focus on fit, quality and wash.”

“The brighter outlook for our major customers has enabled us to become volume intensive with Levi’s and Gap, Inc.’s Old Navy division,” Lindsey continues. “We’re also pleased that PCCA is back on VF’s supplier matrix in the third quarter. Our challenge now is to make as much fabric as we can.”

To meet the challenge, PCCA’s Textile Division is focused on production, quality and safety. All three elements have a direct impact on a successful operation.