New technology is rolling into cotton gins and could put more money into producers’ pockets. With the funding assistance of Cotton Incorporated, the Power Roll Gin Stand was developed and now is being installed in gins throughout the Cotton Belt by PRT Marketing, LLC.

Described as the first truly revolutionary redesign of the cotton gin stand since the original invention by Eli Whitney in 1794 and improvements by H. Ogden Holmes in 1796, the Power Roll Gin Stand works much more efficiently than traditional stands and collects more cotton fiber during the ginning process while reducing energy use and labor at the gins. 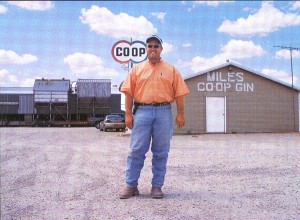 Engineers at the Cotton Production and Processing Research Unit of the U.S. Department of Agriculture’s Agriculture Research Service in Lubbock developed the power roll technology as an extension of Easi Flo cottonseed, a process where the seed is coated with starch so it can be augured easily through traditional grain equipment. After developing Easi Flo, scientists discovered the extra fiber coming off the seed during the coating process resulted in clumps of seeds. Weldon Laird and Tom Wedegaertner, the creators of Easi Flo, concluded more fibers needed to be removed from the seed before the coating process and motivated Laird to design and develop the Power Roll Gin Stand.

PRT Marketing, LLC, promotes the Power Roll Gin stand, and is managed by Russell Laird, son of Weldon Laird. According to the company, several technologically advanced pieces of equipment are used in the new gin stand.

The Power Roll Gin Stand got its name from the powered paddle roll that is used to turn the cotton in the roll box of the gin stand and transfer it into the gin saw cylinder where the lint is gripped by the teeth of the saw. Powered by an electric motor, the paddle roll operates in the opposite direction as the cylinder while a powered seed finger roll rotates in the same direction as the cylinder. The finger roll is used to control the rate of seed passage between the blades of the gin saw cylinder and their subsequent discharge from the gin stand.

The Power Roll Gin Stand was designed so it can be used to construct new cotton gin stands as well as refurbish old ones. 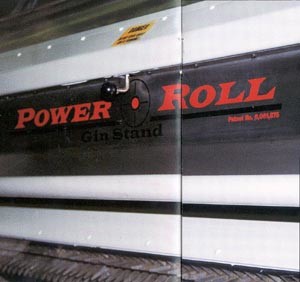 “A Power Roll Gin Stand has not yet been built from the ground up,” Russell Laird said. “Our goal is to get a conversion perfected for each model of gin stands currently manufactured.”

The product is expected to greatly benefit gins by reducing costs and shortening ginning seasons through increased efficiency and faster ginning rates. The paddle roll is more efficient at turning the seed roll and allows the saw to pull lint away from the seed. Testing and research at Servico Inc., in Courtland, Ala., showed the Power Roll Gin Stand was able to run at a 17-bales- per-hour rate, much faster than the normal 12-bales-per-hour, and the energy efficiency alone was estimated to reduce ginning costs by 20 percent.

Another test performed at Servico also showed an average of 31 additional pounds of lint per bale were produced during the ginning process and could result in additional income for a typical cotton producer.

“The biggest problem we have is getting producers to believe in these positive results,” Laird said. “The skepticism is understandable because the researchers did not believe the numbers at first, however, they have seen enough to know the research is solid.”

“Fiber tests have shown it has at least the same fiber characteristics,” Laird explained. Athough the Power Roll was developed in a Lubbock lab with stripper cotton, tests have proven positive with picker cotton, too, Laird noted.

In the 2003-04 season, Power Roll gin stands will operate in gins in Arkansas, Alabama, California and Texas, allowing researchers to see how well the technology works in different climates and growing conditions.

Laird said that one stand was installed at Miles Coop Gin near San Angelo, Texas, in mid-July and one was installed later at Gulf Coast Coop Gin near Corpus Christi, Texas. He hopes to see more in Texas, but he said it will be difficult to get Texas gins to adopt the technology because of the crop losses across the state this year.

“It took five minutes to get the board to agree to spend the money for the Power Roll,” Miles Coop Gin Manager Scott Sonnenberg said. “Currently we run two Continental 141’s and gin18 bales per hour. But, with the Power Roll Gin Stand, we will shut one stand down, and still run 17 bales per hour and reduce electricity costs while acquiring more pounds and a 1.5 to 2 percent better turnout.”

” We are anxious to see how well it will work,” Sonnenberg added. “It took about a day and a half to install it, and we are currently waiting on the computer system.” Sonnenberg believes the fiber quality will improve with the new gin stand.

“Successful research projects like the one that created the Power Roll Gin Stand sustain the overall value of Cotton Incorporated’s research efforts,” Brad Robb, director of communications for the Memphis-based Cotton Board. “While every research project can’t meet with success, it can lend insight toward other successes.”