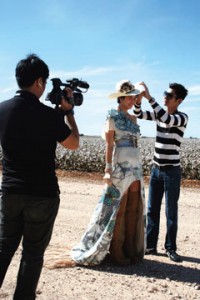 In late 2010, West Texas welcomed a Japanese film crew, and German and Thai magazine editors and photographers for a unique opportunity to experience “cotton culture.”

In coordination with Cotton Council International (CCI), Plains Cotton Cooperative Association’s (PCCA) Public and Legislative Affairs staff assisted the Council in planning and organizing location sites for filming, photo shoots, and tours for these delegations in the West Texas region. In October of 2010, in the midst of the West Texas harvest season, TV Osaka shot a television documentary featuring U.S. cotton to be broadcast to 35 million households in Japan. 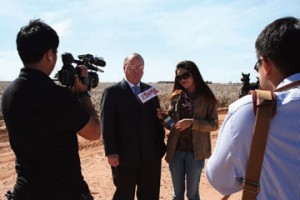 According to the CCI Web site, the documentary was entitled, “Attractive Texas: Fashion, Food and Cowboys’ Spirit”. The 75-minute special chronicled two famous Japanese actresses as they visited cotton fields in West Texas and the American Cotton Growers denim mill in Littlefield, Texas.

“The objective of this program was to give consumers in Japan – the third largest consumer market in the world – a better understanding of the advantages of U.S. cotton,” CCI Communications Consultant Jennifer Jackson explained.

Visitors from Thailand also came to Lubbock in October representing ‘Praew’, a Thai fashion magazine. Photo opportunities involving cotton fields, stagecoaches, barns and other “rustic” elements were captured as a professional model exhibited U.S. cotton-rich dresses. These garments were designed by a team of student designers from Chulalongkorn University in Thailand, winners of the COTTON USA Design Challenge. The clothes were made with COTTON USA-qualified 100 percent cotton fabrics from Thai mills sponsoring the challenge which has been promoted in Thailand for the past five years. 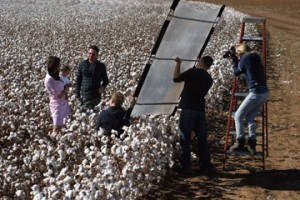 for fashion apparel,” Jackson said. “The cotton fields in Lubbock during harvest time were the ideal backdrop for showing off these cotton fashions.”

The group also included individuals from a TV crew called I-Teen that airs in Thailand. To inform its viewers about current events in the U.S. cotton industry, I-Teen asked PCCA President and CEO Wally Darneille to comment in an interview.

In November of 2010, CCI and PCCA continued to promote U.S. cotton. ‘Brigitte’ is a women’s fashion magazine published twice a month in Germany. This particular magazine is very committed to COTTON USA, according to CCI, and wanted to publish a feature about U.S. cotton.

One of the new philosophies of ‘Brigitte’ is to work without professional models. Thus, the magazine prefers shooting authentic people in their natural environment. Jackson worked with the magazine crew on how to capture this idea and promote U.S. cotton.

A portion of photo shoots for this article took place in the West Texas region featuring women within the cotton supply chain. PCCA staff searched for suitable models that had a background in the industry and desirable locations for the actual photo shoot. Ashley Mimms, who is a member of PCCA, participated in the photo shoot as a model.

“It was such a great experience,” Mimms said. “I was so honored to have the opportunity to be part of a project promoting U.S. cotton.” PCCA Communications Intern Britton Barrett, and her mother, Jana Barrett, also were asked to participate in the photo shoot as models.

The ‘Brigitte’ is scheduled to publish this article in March. Other locations outside of Texas also will be featured.