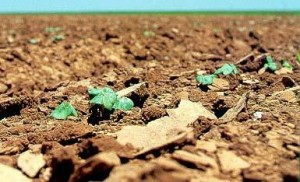 Prolonged rain in West Texas and Oklahoma has turned what cotton farmers initially thought to be a blessing into an ever growing concern for the welfare of their crops. In addition to delays of as much as three weeks in some areas, many faced the possibility of disease attacking their newly planted crops.

Yet, in the face of adversity West Texas and Oklahoma growers basically remain optimistic. For most, this spring’s weather has been merely an inconvenience.

Dan Jackson, manager at Kress-Swisher Coop Gin, expressed concerns of increased seedling disease due to the overabundance of rain received in the area in conjunction with the unseasonably low temperatures. Although the gin region was 50 percent planted as of May 23, Jackson was concerned for those who had not yet planted.

“We have not even had the kind of weather needed to plant,” Jackson said in reference to the colder temperatures the area had experienced this spring.

Other gin communities in the West Texas region were between 45 and 85 percent planted as of early June and hoped to finish up quickly. Although a late emergence raises concerns of an early freeze, the issue of increased insect damage was not a major issue with many gin managers. In fact, most managers expected to have less insect damage at first because most pests will have been starved out; however, there were some concerns about pest migrations.

“Since we have planted later in the month than normal, it is likely that any of the overwintering weevil population will have been starved out; however, we might face some problems with the summer and fall migrations,” noted Randy Kennedy, manager at Citizens-Shallowater Coop Gin.

“We generally get a strong migration in September, but we have not been badly damaged in the past because the crops were mature. Since we are late planting, we are concerned about the increased susceptibility of the crops,” Kennedy explained. He also noted that aphids are abundant in his region this season, and farmers in the area will be forced to spray soon.

As a whole, managers reported little acreage lost to alternative cash crops. In fact, Jackson reported an increase in planted acreage with one of his largest customers going strictly with 1,600 acres of cotton.

Managers in the Rolling Plains area have mixed opinions of the damage done by spring rains.

Ron Riley, manager at the Roscoe Coop Gin, reported cotton acreage would be down approximately 20 percent due to flooding this spring. Many are concerned that the previous winter was not severe enough to protect them from the overwintering weevil population, noted Riley.

Rex Ford, manager at Stamford Farmers Coop, reported a five percent loss of acreage to wheat and milo, with the region being 90 percent planted by mid-June. The weather was expected to have increased the insect population as well in spite of the severity of the winter. Delayed planting was expected to have further increased crop vulnerability to the weevil migrations later in the season.

And yet, in the midst of adversity some see a light on the horizon. Producers for the Snyder Farmers Cooperative were in good spirits despite an unexpected sand storm which damaged 25 percent of the cotton acreage in the area. Robby Robinson, manager at the Snyder Coop, was hopeful of no loss of cotton acreage to alternative crops this season and no delays caused by the spring rains. Also, producers for the coop sprayed last fall and are hoping to see a virtually weevil-free season.

Gin managers in Oklahoma face many of the same challenges as their West Texas counterparts. Delays in planting range from five or six days to three weeks behind schedule. Cotton acreage there is down from previous years due to a combination of weather and insect fears, managers said.

“The delay in planting has raised concerns that a late crop would be overridden with insects which has caused some farmers to go with alternative cash crops,” said Don Brownfield, manager at Davidson Coop Association #1 in Tillman County, OK.

Brownfield said they are hoping to see speedy results concerning a boll weevil eradication program currently before the Oklahoma State Senate. If passed, the state would help fund an eradication program in which farmers pay $5-$6 per acre over 10 years. Only a viable eradication program will bring back skeptical cotton farmers who have gone to alternative cash crops, explained Brownfield.

Jay Cowart, manager at Humphreys Farmers Union Coop, said his region was about three weeks late planting. However, as of May 30 they were 100 percent planted, and the crops were doing well. The major concerns in the Oklahoma region were the emergence of thrips from nearby wheat fields and the unseasonably low temperatures. Cowart noted that cotton acreage is down about 10 percent for his region with the alternative crop being milo.

Several factors will play a part in the outcome of the 1997 cotton harvest. However, most managers said they are optimistic about the situation, and they think that with some preventive measures on the part of the farmers, they will have a successful season.