Will Test Producers’ Management Skills Throughout the Season 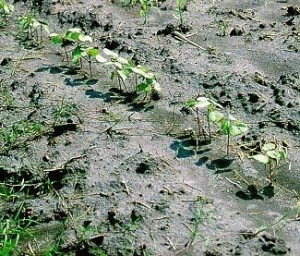 Erratic weather throughout the U.S. Cotton Belt has had an obvious, early impact on the 1997 cotton crop, and nowhere are the challenges that are being presented more pronounced than in South Texas. The situation there is expected to test the management skills of producers like never before.

Unlike the 1996 crop, when drouth severely impacted South Texas cotton acreage and yields, this year has presented an entirely different set of problems resulting from sustained cool and wet conditions from the Lower Rio Grande Valley (LRGV) to the Upper Coastal Bend.

“I’ve never seen a March like we had this year,” says Lloyd Galle, a cotton producer north of Harlingen and a member of Lyford Coop Gin. Heavy rains hit the area at a time when most producers normally plant cotton, resulting in delays of as much as 30 days. “I have one of the prettiest crops right now (early May) that I’ve ever had,” Galle states, “but I just can’t look at the calendar.”

Lyford Coop Manager Steve Marshall estimates his gin’s members planted approximately 18,000 acres of cotton this year compared to 21,000 in 1996. But, he notes some was planted as late as May 1 which probably will not be picked until late August.

“It’s going to be a strung-out season,” Marshall explains. “It is conceivable that we could be ginning past the end of our fiscal year on September 30,” he notes. To reach that point, Marshall and several Lyford members agree that crop management will be critical. 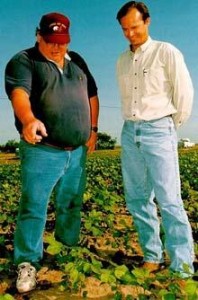 “We must do everything we can to make this crop mature quickly,” Galle adds. “Normally, late August and early September is a wet time of year in our area, but I’ve been farming since 1956, and several years I’ve seen it not rain at all during that time of year.” Another Lyford Coop member, Gary Busse, agrees that management will be important throughout the season.

“I had to replant some of my cotton this year, so I increased my seeding rate from a normal 13 pounds per acre to 16 or 17 pounds,” Busse explains. “This should help it mature faster, and I’ll be using plant growth regulators as much as necessary to ensure quick and maximum development.”

The extended planting season in far South Texas also has presented challenging pest control problems. While some fields were infested with fleahoppers, others had cutworms due to the lack of planting uniformity.

“This year, I have seen more retired farmers out in the fields with their sons and grandsons, and they were scratching their heads trying to decide what to do,” Busse continues. “I’ve also seen more types of equipment in use this year than I have ever witnessed.”

Most of the cotton crop in the Coastal Bend, around and north of Corpus Christi, is not as late as that in the LRGV; however, many of the challenges are the same. Yet, many gin managers remain optimistic when they consider the problems faced in 1996. 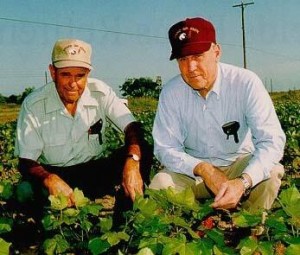 “Last year, we only ginned 4,700 bales of cotton from 18,000 planted acres due to the drought,” explains Bayside-Richardson Coop Manager David Wyatt. “After last year, we won’t cuss a rain around here,” he adds. Cotton acreage in the coop’s community was estimated at 13,000 to 14,000 acres in early May.

“We may be three to four weeks behind schedule here,” Wyatt notes, “but with the exceptional moisture and enough warm days, we should be able to close that gap.” Even before the cotton crop was planted in the Coastal Bend, expenses for weed control were mounting due to early rains.

“A lot of producers here sprayed Roundup ahead of their planters this year, and it worked well where they had their rates properly set,” Wyatt says. “Fortunately, we don’t see this situation every year.”

Farther north, the crop was only two to three weeks behind normal in the Moreman Community Coop Gin area, according to Manager Lester Frazier.

“Based on the amount of seed and chemicals sold thus far, our cotton acreage should be about the same as in 1995,” Frazier points out. “Hopefully, we can make up enough ground with our crop’s development that wet weather in late August and September will not present another set of problems,” Frazier concludes.

Despite the early problems faced in South Texas this year, producer and gin manager attitudes are much improved compared to a year ago. Oh, what a difference a year makes.