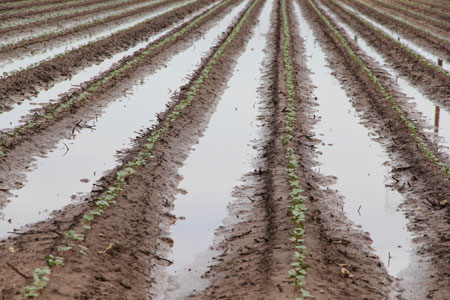 How much will it rain this year? This question is always on a farmer’s mind when spring time rolls around. Dozens of decisions must be made that revolve around this one simple question and each farmer will hope and pray they will have favorable weather to produce their crop for the year. In recent years, widespread drought has caused farmers to deal with the challenge of producing a crop with limited water. This year, however, producers are facing a much different situation.

This substantial rainfall in May made it difficult for producers to get into the wet fields to plant their crops, and this forced them to work against the clock to get the cotton in the ground before the crop insurance planting deadlines. According to USDA, only 46 percent of the intended cotton acreage had been planted as of May 31, 2015, compared to the five-year average of 70 percent.

“Late planting will cause a later than average harvest,” Gwinn said. “Usually, South Texas cotton is the first in the U.S. and world to come off resulting in more of a premium price, but the late harvest will cut into that opportunity. Yields will be lower as cotton plants in some cases have been stunted with the lack of sunshine. The producers are doing what they do best, adapting and dealing the best they can,” Gwinn added.

Tanner Streety, PCCA Marketing Communications Area Manager, said he has seen a variety of weather conditions in West Texas this year that have affected the crop.

“We have had flooding, wind and hail, but the most important thing is that we have sub-soil moisture,” Streety said. “Farmers are known for making something great out of nothing. We have been blessed with some good rains, and the acres that have survived the weather look extremely promising.”

PCCA Marketing Communications Area Manager, Matt Monroe, agreedand said this year has potential to be one of the better ones if Oklahoma farmers can get a few timely rains and the necessary heat units in July and August.

“I feel like the rains in Oklahoma have made this crop a little late,” Monroe said, “but they have also provided the best moisture for a crop since 2010. Because of this great start, producers are excited and feel like they have a crop they can invest in. Hopefully this drought is a thing of the past.”

With this much rain, Streety said there was a possibility that controlling weeds could continue to be an issue for farmers.

“I was concerned that with all of the moisture we received we would have another year of weed problems,” Streety said, “but from what I have seen, farmers have done a great job controlling them. However, with the recent heat the weeds have become more of an issue. Even though the cotton acreage is down, I have no doubt that we can get great yields with the help of a few timely rains.”

Taylor Hurst, PCCA Marketing Communications Area Manager, said West Texas producers and gin managers agree this is the best start they have had in awhile. Even with the recent rain and flooding in areas, the mood is still very positive.

“Everyone agrees that it is much better to be too wet than dry,” Hurst said. “I have even had one gin manager mention this is the first year in a long while he will actually have dryland cotton to gin. As long as the rest of the summer and fall will deal us some favorable weather, I believe this will be a really good year for PCCA and our members.”