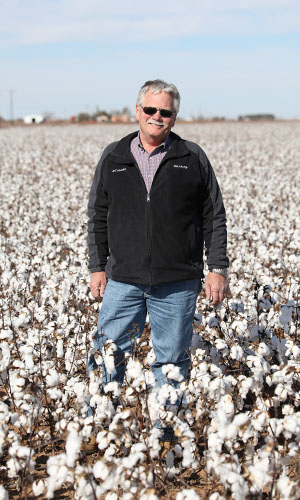 “Growing our crops, we understand the nature of what we do, what we experience and what we are up against,” Randy Smith said. “I think being able to be part of it past the farm is rewarding from the standpoint that it enables us to broaden what we do and have a little more control over our end product.”

Passion – Randy Smith, a fourth-generation grower-owner from Ropesville, Texas, and PCCA’s newly elected Board Member serving District 5, has a passion for his family, farm, crops and the future.

Smith has been married to his wife, Pat, for 42 years. Together, they have three children, Rob, Jessica and Lauren. They also have been blessed with six grandchildren and have two on the way. Smith said that while his children chose to pursue careers other than agriculture, it was important to him to raise them on the farm, and he only wants them to be happy no matter what they do.

“I think I enjoy just being part of growing things, and the lifestyle you get to experience by being part of an agricultural community,” Smith said. “I think there is something special about small town America that I think, in conjunction with having a love for growing crops, being able to be involved in a small ag community is great. It meant a lot to me that my children could be raised in that setting, and I think it meant a lot to them.

Born and raised in Ropesville, Texas, after high school, he studied agricultural engineering at Texas Tech University and began farming his junior year of college. However, building his farming operation was not without its challenges in the early years of his career.

“I started farming while I was going to Tech with 230 acres, which 60 of that was irrigated, and it has just kind of evolved from there,” Smith said. “This is my 41st crop. My granddad had a little bit of land when he retired that he let me rent, and I had some alfalfa on it. So, we grew alfalfa, and I had just a few cows that we started with. We baled some hay on the side and started growing some cotton. The first ten years I guess, we did not have a lot of success as far as renting more land or making very good crops. At points in time, it was pretty questionable whether I was going to survive this or not.”

While the early years of his career were more challenging than some, he said the challenge today is to continually improve his operation.

“The challenge I think is to always do just a little bit more or be a little better,” Smith said. “We have been fortunate enough to have some fairly good yields over the years, and I want to continue to push that envelope as much as I possibly can. Back when I started farming in the late ‘70s our cotton in West Texas was considered junk cotton, basically suitable for jeans. We grew very short staple, low strength cotton. So, it is with a lot of pride 41 years later for myself and the rest of those that are involved in cotton production in West Texas to be able to have some of the best qualities in the world now.”

The goal of continually improving not only applies to yields and qualities, but also to the practices farmers use to care for the land. Smith said he is always looking for new sustainability practices to implement on his farm.

“Well, one of the things I am most proud of is we started 23 years ago putting drip irrigation in to help sustain and utilize water in a better, more efficient way to get a better return financially for every gallon of water we use,” Smith said. “We have cut the number of trips we make with our equipment to not use as many petroleum products, but also we had to do it to try to cut costs and make our operations more efficient. W are actually experimenting this year with some different kinds of cover crops that will hopefully allow us to utilize rainfall a little better and maybe incorporate some nutrients through some of the cover crops into the soil that we had not been doing previously. Hopefully, at the end of the day all of this works in conjunction with being environmentally sound and allowing us to grow crops that are extremely valuable for the rest of the world.”

Smith said he initially began doing business with PCCA because he felt like he was not doing well marketing cotton on his own, and it was a big bonus to have the cooperative market his crop for him.

“I have found that allowing PCCA to market my cotton has enabled me to spend nearly all of my time in production,” Smith said. “Then, of course, their presence in the world markets and the opportunity to have a little ownership in the cotton from the farm to the point of sale is good for my operation. We know that we have people up there that are looking out for us and want the best for us. They are in this just as much as we are, and they are committed to making us everything we can be.”

Smith began serving on the PCCA Board of Directors after being elected at the cooperative’s Annual Meeting in September 2018. He said he is very humbled to have the opportunity to serve in this capacity and be more directly involved in the cotton industry than he has been in the past.

“I am new to the board, and I know there are a lot of things that I am not aware of that I have to learn and understand a little better about the inner workings of PCCA,” Smith said, “but I am very committed to what PCCA stands for and I am just really excited to be a very small part of that.”

Smith said to this point the thing he enjoys the most about PCCA is the opportunity to interact and visit with other farmers and learn from them.

“I think one of the things I enjoy most is being able to meet on a fairly regular basis,” Smith said. “Up to this point, my experience with PCCA as far as being directly involved has been through the Delegate Body. I look forward to that meeting because you get to see producers from all over the South Plains, and at times even Oklahoma and Kansas. It does my heart good to see people from other areas and to know a little bit about what they experience and what they are dealing with.”

Smith also served on the Ropes Independent School District Board for 21 years. He is a member of Hockley County Farm Bureau and is a past FSA committee member. In the past, he has also served as a committee member for the High Plains Underground Water District.

Whether it be loving his family, working the land or serving his community or the agricultural industry, Smith approaches each with the same level of passion and dedication. He is committed to what he does, and he knows that agriculture truly is the future of this nation.

“As ag producers in West Texas, we are very committed to being an integral part of the economy in West Texas, the state and the nation. We do it through agriculture,” Smith said. “We help with a little bit of trade balance, and it is a renewable resource. We get to do this over and over every year. To me, I think for the nation that ag will always be needed. I don’t know if the nation understands that or not, but we will always be an integral part of the nation and its economy. It is self-preservation, that we don’t return all of our production over to another country and we are still producing it here in the United States. We are very viable producers and in my estimation, the best in the world.”