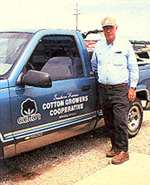 Southern Kansas Cotton Growers Cooperative (SKCG), located in Winfield, Kan., took its place among the ranks of local industrial giants Rubbermaid and General Electric when the coop received the Industry of the Month Award for April from the Cowley County Economic Development Agency (CCEDA).

“With all of the big industry in this area, it’s quite an honor for a little cotton gin to be selected by CCEDA for an award,” said Gene Latham, SKCG manager.

The gin welcomed a group of CCEDA personnel and city officials from Arkansas City and Winfield, Kan., with an informative presentation about cotton and a tour of the coop’s facility.

Expectations for the 2003-04 crop are even higher as Latham anticipates cotton acreage to increase significantly in his trade area. “Let’s just say I expect a significant increase in ginning this season, but I don’t want to jinx a good thing by throwing a number out there,” Latham said with a smile.