The Texas Agricultural Cooperative Council (TACC) recently honored three individuals for their dedication to the cotton and cooperative industries during the organization’s annual meeting in San Antonio.

TACC named Bob Weatherford of Corpus Christi, Texas, Cooperator of the Year. Honored with the Ginner of the Year award was Gene Beck of New Home, and Wayne Martin of Lubbock was presented the Distinguished Service award. Weatherford began his career in the cotton industry upon graduating from Auburn University in 1965 with a degree in agriculture and joined the National Cotton Council as a field representative in Pine Bluff, Ark. He later transferred to Corpus Christi, Texas, where he stayed until 1975 then became area supervisor for the council in Lubbock until 1978. He returned to the Coastal Bend area of Texas, and in 1982, joined Gulf Compress in Corpus Christi. Weatherford became general manager of the compress in 1994. 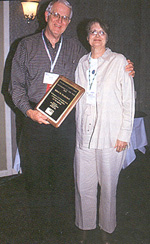 Bob Weatherford and his wife, Carole

” I have worked with him for the past 22 years, and during that time he has always conducted himself in the most professional manner,” Sid Brough, general manager of EdCot Coop Gin said. “I consider him a personal friend and a tireless worker and strong supporter of our industry.”

“His accomplishments and success in running a profitable regional cotton compress have resulted in a strong cooperative influence among producers in our area,” Jim Massey, general manager of Gulf Coast Cooperative in Kingsville, said.

“It has been a career highlight for me to have worked with him for nearly 30 years,” Vern Highley, a former employee of PCCA, said. “Early on, he won friends and supporters to the National Cotton Council in a period when the Southwest was struggling to improve its cotton quality, production, and marketability. Bob was tall in frame but even taller in the traits people admire in their leaders.”

Weatherford has been a director of the National Cotton Council and served on several of its committees. He has been chairman of both the TACC Budget and Finance Committee and the TACC Legislative and Governmental Affairs Committee. Last year he served as TACC president. Weatherford has served as secretary of the Corpus Christi Cotton Exchange and treasurer of the Coastal Bend Agricultural Council. He also does some important work outside the cotton industry.

According to Allen May, board chairman of Gulf Compress, Weatherford devotes time and energy to the Bill Glass Prison Ministry, a ministry to cities, schools, and prisons founded in 1969 by former pro-football player Bill Glass. For the last 22 years, Weatherford has traveled extensively to support the prison ministry. He has taught at local jails and prisons and recently became a licensed preacher. 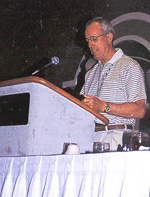 Cooperative Ginner of the Year Gene Beck is described by those who know him as loyal, spirited, innovative, creative and appreciative. He began his career in the coop grain business with Producers Grain Corporation in Plainview, Texas, in 1963. After three years there, Beck was hired by Littlefield Farmers Cooperative Gin and Elevator. In 1972, Beck was employed by Hackberry Coop Gin until 1981 when he was named manager of Lubbock Cotton Growers. His latest move occurred in 1998 when he became general manager of New Home Coop Gin.

“He has been a dedicated, tireless worker in promoting the interest of the cooperative producers and has been very successful during his tenure at a number of cooperatives,” Wayne Martin, recently retired CEO of PYCO Industries, said.

“He has established a reputation for innovation and sound fiscal management and has initiated significant changes making it (New Home Coop Gin) one of the most modern gins around,” U.S. Rep. Charles Stenholm said.

PCCA President Van May said, “He has accomplished much in his life while still being ‘one of the boys,’ and I can think of no one more deserving of this honor. In fact, he best exemplifies the spirit of this award.” 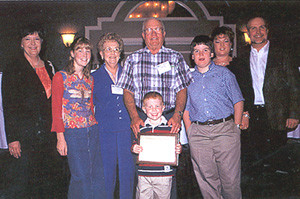 In addition to his hard work in the cotton industry, Beck has found time to be active in his local 4-H and FFA programs and teach Sunday school classes at his church.

Wayne Martin recipient of TACC’s Distinguished Service award, is described as a pioneer, a leader, and a family man. Martin graduated from Texas Tech University with a degree in accounting and has served on the boards of directors of the Texas Agricultural Cooperative Council, National Council of Farmer Cooperatives, National Cotton Council, and Soy-Cot Sales. He is past chairman of the Texas Food and Fiber Commission, the Texas Cottonseed Crushers Association, and the National Cottonseed Products Association. Martin currently is serving in his final year on CoBank’s Board of Directors.

Martin spent his entire career in the cotton industry since he began in 1957 at Plains Cooperative Oil Mill and oversaw a merger with Yazoo Valley Oil Mill in 1999 that created PYCO.

Martin was awarded the TACC Cooperator of the Year award in 1988 based on his commitment to serving farmers, the cotton industry, cooperatives, and his company. He retired from PYCO on Oct. 1, 2002.