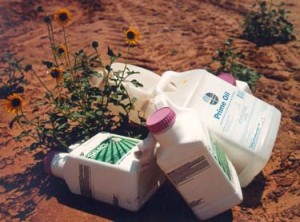 Agriculturists have an opportunity to eliminate the assortment of empty plastic pesticide containers, pesticides, depleted tractor batteries, and jugs of used motor oil sitting around their barns and sheds through programs known as the Texas Country Cleanup and the Agricultural Waste Pesticide Collection.

Rural households and licensed agriculturists can voluntarily dispose of their hazardous wastes through a program conducted by the Texas Natural Resource Conservation Commission (TNRCC). The Commission, in cooperation with the Texas Agricultural Extension Service and the Texas Department of Agriculture, started the program in 1991 to assist rural agriculturists in disposing of their unusable pesticides and recycling empty containers while helping prevent surface and groundwater pollution and harm to individuals.

The Texas Country Cleanup is held annually in 40 major agricultural production areas. Site selection is based on the amount of material collected at previous events, the agricultural activity of the area, and the ability to coordinate the event with local resources and other TNRCC programs. Lead-acid batteries, used oil and oil filters and empty, properly rinsed pesticide containers all are accepted during the collection. Used tires also are accepted at designated events. TNRCC only accepts 50 tires per participant, and the tires must have a rim diameter no larger than 24.5 inches.

The recyclable materials are picked up by regular recycling services at minimal or no cost to the state, according to Wyman.

The program collects banned pesticide chemicals as well as the Texas Country Cleanup recyclables. The chemicals are handled according to Environmental Protection Agency standards and are incinerated in a federally licensed facility.

Materials that are not accepted include explosive materials, fertilizers or nutrient materials that are not hazardous, compressed gas cylinders, and pesticides that contain Pentachlorophenol or 2,4,5-T-Silvex. Unrinsed or improperly rinsed empty pesticide containers also are not taken. To qualify as “properly rinsed,” containers must be triple or high-pressure rinsed. Wyman says TNRCC spends approximately $500,000 each year to dispose of the chemicals.

Wyman also notes the program has been “highly successful” with approximately 500,000 pesticide containers collected each year.

Anyone is eligible to participate in the programs which are free. Collections usually are held at “ag-friendly” sites outside city limits such as coops, fairgrounds and county barns. Texas Country Cleanups are held from 8 a.m. to noon and the Waste Pesticide Collection sites are open from 8 a.m. to 1 p.m. starting next year.

Wyman says, “One good thing about this program is there is a lot of cooperation between state agencies. We get help from county extension agents and city officials, too.” Happy with the success of the recycling and disposal programs, Wyman says their only problem is the programs’ limited number of collection dates.

“We can’t do enough of them,” Wyman continues. Texas Country Cleanup stations will be set up in the following communities during August:

For information about the next Texas Country Cleanup or Waste Pesticide Collection scheduled for your area, contact your local county agricultural extension agent or email Will Wyman at TNRCC at wwyman@tnrcc.state.tx.us.