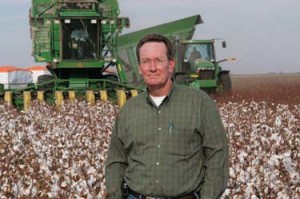 Left to Right: Eddie, Heath and Steve Verett at one of their farms. The trio gin their cotton at Owens Coop, Associated Cotton Growers and Texas Star. Photo courtesy of Plains Cotton Growers.

In a community where agriculture is of vital importance, the Lubbock Chamber of Commerce has chosen the first board chairman in its history who is both a cotton producer and a cotton industry spokesman. Steve Verett, a Crosby County cotton farmer and executive vice president of Plains Cotton Growers (PCG), will serve as the Chamber’s 2006 chairman.

Verett began his service to the Chamber as a member of its Agriculture Committee for nine years and was elected committee chairman in 2000 and 2001. He was elected to the Chamber’s Board of Directors in 2003 and in 2004 served as the vice chairman for the Public Affairs division, a branch of the Chamber that deals directly with governmental affairs.

“Chairman-elect Steve Verett is one of the leading spokespersons in the country for the cotton industry,” says Lubbock Chamber of Commerce President Eddie McBride. “His timing to lead the Chamber is representative of both the importance of agriculture to the Lubbock region as well as the importance of cotton as a commodity of interest to the United States.  His vast agribusiness background and ability to educate legislators, business people and others about the importance of the cotton industry will be extremely significant to our region during the upcoming Farm Bill discussions in the U.S. Congress as well as the World Trade Organization battle over cotton subsidies,” McBride said in December.

Verett has long been a strong voice for Texas High Plains agriculture and has been an agricultural advocate from the farm to the federal level. As a board member and eventual executive vice president of PCG, Verett has been instrumental in bringing needed economic relief to cotton growers on the Texas High Plains through the promotion of beneficial legislative and regulatory changes. Beginning in 1985, Verett served as a Cotton Council International (CCI) Board member and oversaw foreign promotion for U.S. cotton for nine years. He was involved in the National Cotton Council (NCC) from 1988 until 1993, beginning as a producer-delegate and later becoming a member of the council’s Producer Steering Committee before serving on the NCC Board of Directors.

He was appointed by the Secretary of Agriculture in 1988 to the USDA Cotton Marketing Advisory Committee that developed recommendations for changes in USDA’s cotton classification system and marketing loan programs. An appointment by Texas Governor William Clements in 1990 earned Verett a board position on the Texas Agricultural Finance Authority. He also has been active with Farm Bureau, Southwest Rotary Club, and was a board member for both the Crosby County Fuel Association and the Crosbyton Clinic Hospital.

Despite Verett’s active involvement in multiple organizations and his busy professional career, he has been in a working partnership with his brother Eddie and nephew Heath since 1976. The trio farms 4,000 acres in Crosby County where production includes cotton, wheat, grain sorghum, and sunflowers.

His many responsibilities make time a premium for Verett; however, he believes involvement in the Lubbock Chamber of Commerce is a worthwhile endeavor, especially since it enables him to promote the importance of agriculture in the local economy and further the causes of agribusinesses in the Lubbock and High Plains area.

“Agriculture is the Chamber’s number one priority when it comes to state and federal legislative issues, and that speaks volumes to the folks in Austin and Washington,” Verett says. “In fact, back in 2001 the number one federal priority for the Chamber was the passage of the 2002 Farm Bill. The resounding message to our political leaders is that agriculture is not only important to the farmers in the Lubbock area but to the entire economy,” he explains.

Agribusiness is the keystone of the diversified economy on the Texas High Plains, and businesses related to agriculture add significantly to the area’s financial wellbeing. Approximately 20 percent of the nation’s cotton is produced on the Texas High Plains. According to Chamber of Commerce data, the annual value of the harvested crop on the High Plains has exceeded $1 billion dollars in recent years, and the success and value of the cotton crop has had a ripple effect throughout many sectors of Lubbock’s economy. McBride says Verett will help others better understand the impact of cotton on the area.

“Steve’s ability to make our elected officials and business people understand the intricacies of the cotton industry has been tremendously beneficial to their decision-making,” McBride says. “Steve’s tenure with the Lubbock Chamber of Commerce during 2006 is critical to the Chamber, our business community and the whole South Plains of Texas.” Verett is excited about serving the Chamber in his new position.

“I am humbled and very proud to serve as the Lubbock Chamber of Commerce Board Chairman,” Verett says. “I see myself not as an individual, but as a spokesman for the agricultural community in this area, and I hope to represent agriculture and the Chamber to the best of my ability,” he concludes.