The Texas Agricultural Cooperative Council takes time each year to honor individuals who have stood out as a champion for cooperatives and their members. This year, it is no different. The four winners of the three awards have excelled in their perspective fields and have displayed characteristics in line with the cooperative principles. 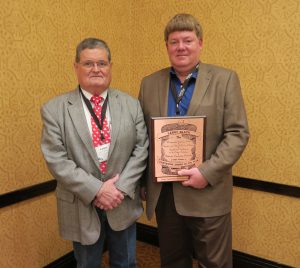 Cooperative Ginner of the Year

Larry Black, Gin Manager at Central Rolling Plains Co-op, is known for his unwavering loyalty and support of the cooperative principles. He works hard with the well being of the entire membership in mind each day.

Black was born in Wichita Falls, Texas, and graduated from high school in Eldorado, Oklahoma. After high school is when his cooperative career took root. He went to work at Quanah Farmers Co-op and in 1986 became the assistant general manager before being promoted to general manager in 1988. In 2002, Black heard of an opening at Roscoe Co-op Gin, which is now Central Rolling Plains Co-op, and submitted an application. Larry Williams, PCCA Board Member and former Chair of the board at Central Rolling Plains Co-op, said the decision to hire Black was an easy one.

“Once we talked to him, our board was unanimous in our choice of Larry to be our manager,” Williams said.

After managing Roscoe Co-op for a while, a neighboring co-op gin asked Black to also manage their gin. From 2005 to 2007 Black successfully managed both gins and in 2007 ginned a combined 109,991 bales. That year also came with great challenges when a gin yard fire burned more than 100 modules. However, thanks to Black’s good management all modules were spaced according to insurance guidelines so his members received maximum benefits for their cotton.

Black has continually improved the gin’s efficiency and the profits returned to its members. He also works closely with his board of directors which keeps them informed and engaged and is always seeking their input on how the gin can better serve its members.

He is very active in his community as well as the industry. He is involved with PCCA, The National Cotton Council, and the Rolling Plains Cotton Growers.
He served as president of TACC in 2013-14 and is the current secretary of the Texas Cotton Ginners’ Association. Black has been married to his wife, Cynthia, for more than 30 years. They have two daughters, Alyssa and Madison, and two grandsons, Kameron and Brayson. 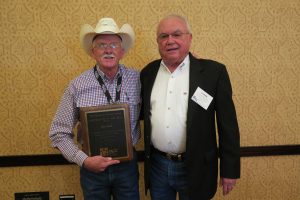 Cooperator of the Year

TACC’s Cooperator of the Year award is only presented to those that have provided exceptional service and have portrayed a leadership style and legacy that impacts others for years to come. This year’s winner embodies all that this award stands for. When Rex Ford, Manager at Farmers Co-op Society of Stamford, is not at the gin or grain elevator he will be found on his own farm raising cattle or wheat.

Ford grew up in Leuders, Texas, on his family’s farm. After moving away for a while, he returned home to help his father while also working at a local bank. He and his wife, Cindy, who also grew up in Leuders, then moved to Stamford, Texas, where he worked for John Deere.

In 1991 Ford began his career in cooperatives when he became the manager at Farmers Co-op Society of Stamford. He has served the co-op for more than 25 years and is one of few gin managers who oversee two cotton gins, a grain elevator, and the sale of crop inputs. Since Ford has been manager, the co-op has tripled production and become the largest gin in the area. They also were awarded Elevator of the Year in 2012 by the Texas Wheat Board.

Ford has a passion for cooperatives and a true talent for communicating with the industry and generating more membership for the co-op. He has strived to reach growers and share the co-op advantage with them. Ford is active with the regional cotton cooperatives and is involved in other professional organizations. He is a past president of TACC and has served as a delegate body representative and pool committee member for PCCA.

“Rex’s enthusiasm for cotton and support of the industry is truly reflected in his work,” said Lonnie Winters, Vice President of Marketing at PCCA and 2016 Cooperator of the Year. “He has been a tremendous asset to his cooperative and within his community.”

Ford is very passionate about his community. He has served, and continues to serve, in a wide variety of organizations including 4-H, FFA, Stamford Chamber of Commerce, Development Corporation of Stamford, Stamford Civic Club, Stamford Art Foundation, and the Texas Cowboy Reunion. He also serves as a deacon at Orient St. Church of Christ. Ford and Cindy have three daughters, Tiffany, Tara, and Tristin, and four grandchildren, Shelby, Breck, Charlie and Dalli.

Board Chairman at Farmers Co-op Society of Stamford, Billy Teichelman, said Ford has truly shown his passion for the industry and his community.

“In Rex’s many years of managing our cooperative, he has shown, by his leadership abilities, that he is one of the top managers in the cooperative gin community,” Teichelman said. “Rex is a devoted family man who adores his wife, Cindy, and their three daughters. He also is a wonderful grandfather to his grandchildren. We believe this man fits the criteria for this award.” 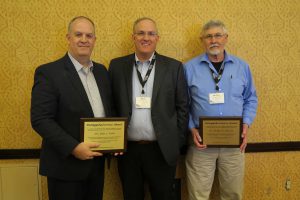 John Park, Ph.D., has dedicated his career to teaching college students about the cooperative business model in an effort to build tomorrow’s co-op leaders and, in applied research, to train today’s co-op directors and managers.

“You might say that Dr. Park is planting high quality hybrid seeds,” said Gary McLaren, “that the cooperative system later harvests in the form of cooperative leaders.”

Park led a national effort to establish a community of practice for cooperative education on the extension.org website. He also chaired a national committee for the improved competitiveness of agricultural cooperatives and he is a recognized leader of the Food Distribution Research Society. Park and his wife, Jacqee, live in College Station, Texas, and have three children.

“Dr. John Park has worked very hard becoming familiar with Texas cooperatives and helping whenever and wherever needed to answer their questions and solve their problems,” said Jimmy Roppolo, Manager at United Ag in El Campo, Texas. “I had the pleasure to host Dr. Park at our cooperative soon after he arrived in Texas. I have never hesitated to call Dr. Park for advice when our cooperative faced different challenges. He has brought cooperatives to the forefront in Texas A&M College of Agriculture, and now many students who weren’t raised around a cooperative know how they work and how producer ownership pays off.”

Phil Johnson, Ph.D., has been a farmer and has embraced cooperatives, both as a member and an academic doing research and teaching about cooperatives. He is even a long- time grower-owner of PCCA.

Originally from Lubbock, Texas, Johnson graduated from Friona High School and received his bachelor’s, master’s and Ph.D. from Texas Tech University. He began his career as a research assistant in the Department of Economics at Texas Tech University in 1970. He was then an Extension Economist for the Texas Agricultural Extension Service in Fort Stockton, Texas. Following that, he became a full-time farmer/owner- operator of a 1,450 acre irrigated grain, cotton, and livestock farm in Parmer County, Texas. After hail damage to crops a few years in a row, Johnson made the decision to walk away from farming.

He then pursued a career in teaching and research at Texas Tech, becoming Professor, Chairman and Charles Thompson Chair, Agricultural and Applied Economics and Director of the Agricultural Finance Institute. Ryan William, Ph.D., Assistant Professor at Texas Tech, said Johnson’s dedication to co-ops is apparent in his work.

“While Dr. Johnson’s direct service to cooperatives in Texas is easily observed, it is his indirect contributions that are likely most valuable,” Williams said. “His teaching of students at Texas Tech University provides an exposure to the role and functioning of cooperatives. This exposure often leads students to enthusiastically pursue internships and employment in cooperatives across Texas. Furthermore, those students are well equipped to identify opportunities to improve outcomes for co-op members as a result of his efforts.”

Johnson has been a strong advocate for the existence, operation, and relevancy of co-ops in agriculture. He routinely invites co-op leaders to participate in his classes to promote the co-op business model.

“Dr. Johnson really stresses the importance of cooperatives in his classes,” said Robert Lacy, President and CEO of PYCO Industries, Inc. “Each semester he allows PYCO, PCCA, and Farmers Cooperative Compress the opportunity to tell his class who we are and what our role is in the agriculture industry. This exposure to the regional cooperatives could influence their decision-making in the future.”

Johnson lives in Shallowater, Texas, with his wife Trudi. They have two daughters, Beth Anne Frazee and Lindsey Dickerson. They have two grandchildren, Ashlee Davis and Kade Johnson, and a three-year-old great grandson, Briar Davis.