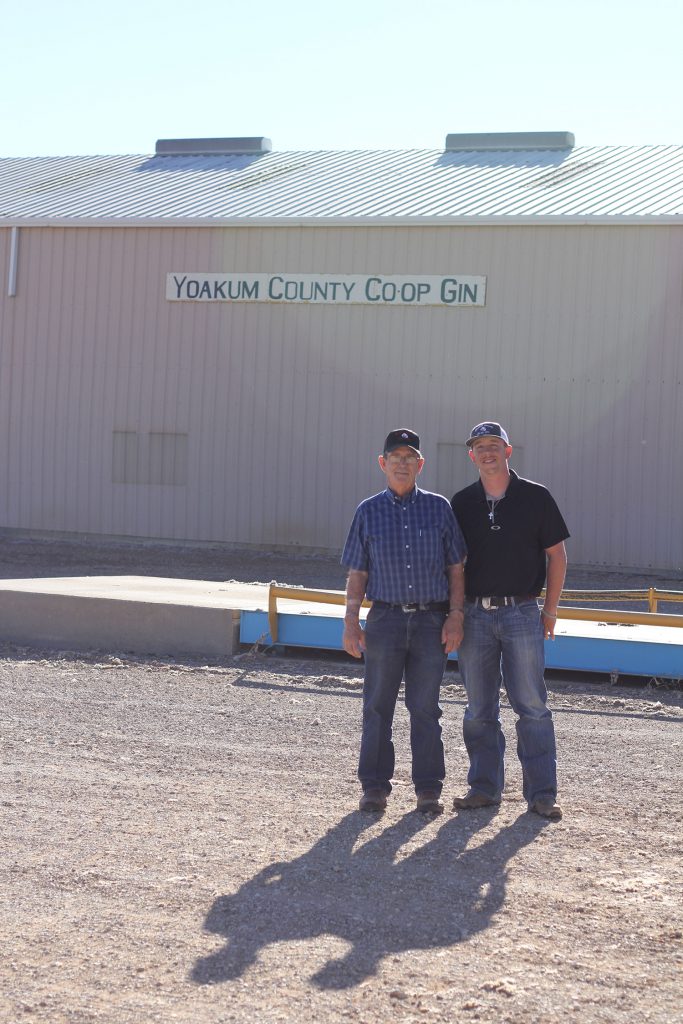 Darwin and D.J. Robertson are keeping Yoakum County Co-op Gin in the family.

Just like agriculture is the backbone of the country, Darwin and D.J. Robertson are the backbone of Yoakum County Co-op Gin. With 28 years of experience in the ginning industry, Darwin is preparing to hand over the reins to his son, D.J., who followed in his father’s footsteps and began his career in the industry last year.

Darwin began his career in the ginning industry in 1989 at Maple Co-op as the gin superintendent. In 1994, he had the chance to become the manager at Yoakum County Co-op Gin. He was there five years before he moved to Muleshoe to be the gin manager. During his 10 years at Muleshoe Co-op they built a new gin. He then had the opportunity to return to Yoakum County and has been there the past seven years.

“I enjoy taking care of the farmers,” Darwin said. “I think our responsibility is to do a good job for them and to get it done so they can get their product sold. So we have a policy at our gin that we, as far as I know, have never been more than seven days behind. Normally, we gin it within a day or day and a half from when they turn it in. They have a lot of money tied up out there so it is a joy for me to come to work and get complimented on things that I feel are my job and I should do, but they feel like I am going above my job.”

Darwin said there have been both challenging and rewarding times during his time at Yoakum County.

“The most rewarding thing to me is we have brought this gin up to one and a half years on our book credits,” Darwin said. “In 20 years, this gin has never shown a loss. It is rewarding to me to be able to pay the dividends that we have and to have our book credits up that close.”

D.J. worked for an electric company before having the opportunity to come work at the gin last February. He said the most challenging part for him has been learning exactly how things work in the gin.

“When I was younger, I had been in a gin and helped a little while they were building the gin,” D.J. said, “but that was all I really knew about a gin. So coming here I am learning new machinery. I knew the electrical side of things from working at the electric company. Just knowing how it all works has been a challenge in itself.”

Even through the challenges, D.J. said he looks forward to coming to work every day, and from the gin to the regionals, he enjoys the togetherness of working at a co-op.

“A lot of people dread their job. This isn’t a job to dread,” D.J. said. “During the ginning season when things are down, it is hard to want to come take care of it, but you know you have to get it done. Just being part of a co-op is a really tight knit group. You have everybody on your mind, and you enjoy it because everybody is together. It’s not an individual thing. That’s what I like about co- ops is everyone is working toward the same common goal; it is not everyone working for themselves.” Throughout his career, Darwin said what he has learned is that the teamwork mentality works.

“I think one of the biggest lessons we have learned in this deal is we are not necessarily the boss and employees. We are all a group doing this job,” Darwin said. “We treat them with respect and listen to them. D.J. and I are the type that there is not a thing out there they do that we won’t crawl right in and do it with them. It is not that I am the boss and they are the hands. It is a job, and we do it together.”

Darwin credits his success in the industry to hard work, honesty and his faith. He hopes this is what he instilled in his son as he begins his career.

“In my opinion, it is the good Lord,” Darwin said. “I give Him credit for my success. You have to work hard, and you have to have patience with your customers and be honest in everything you do. There are people that you can call and talk to who will help you through everything. My advice is to admit when you make a mistake, and you can work it out.”

It is no secret that farmers occasionally face tough times. Darwin said he always tries to support and encourage them.

“Cotton farming has been a lifestyle of farmers for many years,” Darwin said. “There is no one who hasn’t had hard times in it. They are all good guys, and I am always telling them it will work its way back. So, look forward to next year and just keep fighting. To me the co-op system is the only system that puts every bit of the money and profits back into the farmers’ pockets, and it helps them during hard times.”

D.J. said his father and others like him in the industry set the bar high. He hopes with hard work and determination he will be able to live up to their standards.

“That is a goal that has been set way before me, and it is going to be hard to fill,” D.J. said. “Hard work is what it takes, and if I am even half of the person he (Darwin) is then I will feel accomplished. They just set the standard so high, and that is not something you take lightly. I will take the advice he has given me and run with it and hopefully pick up some things along the way.”

Like father, like son, Darwin is honored that D.J. decided to pursue a career in the ginning industry.

“I am proud that he has decided to follow and do what I have done,” Darwin said. “I think he needs to do what he wants to do, and he can take it above me. I don’t doubt that. I have always been lucky and just tried my best. I think he has the ability and education to do well. I don’t worry about him. I am just proud that he decided this is something he would like to do. It is a great life.”