From the Dust Bowl in the 1920s to the fluctuation of rains in the last few years, there is no doubt water has become a precious resource to farmers in West Texas. Thankfully, an organization based in Lubbock, Texas, is revolutionizing the way water is used in the region’s farmlands.

Established in 2005 and funded by the Texas Water Development Board, the Texas Alliance for Water Conservation (TAWC) is a project involving Texas Tech University, Texas A&M AgriLife Extension, the High Plains Underground Water District, and producers in West Texas. The project uses demonstrations of irrigation technologies on land volunteered by farmers for economists and scientists to conduct research on the effectiveness of water conservation practices. 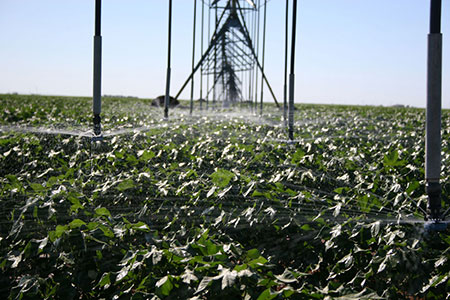 Rudy Ritz, Ed.D., has served as the coordinator for outreach and education for the TAWC since December 2013. He said the data they have acquired over the last few years provides a strong foundation toward water conservation efforts.

“One of the main objectives is to help producers manage their water like a checkbook,” Ritz said, “but the general public also wants to know what producers are doing to improve irrigation methods.”

Rick Kellison, project director for the TAWC, has been with the program since its start in 2005. Kellison coordinates efforts between producers, industry, and political entities in order to get new technology to farmers.

“When we started, there was not a lot of irrigation management technology available to growers,” Kellison said. “Today, we have become a nonbiased source for new technology as it comes to this region, and we try to get that technology in the growers’ hands, not to endorse one over the other, but to help them make decisions and to share what they have learned as producers.”

The TAWC is moving toward more research on a series of new technologies such as dragline, which is an above ground drip-tape, and variable rate technology with irrigation systems that change the amount of water applied based on soil texture and other characteristics. Ritz said that the success of their research can be measured by the impact their education and outreach efforts have had on producers.

Another technology is the usage of capacitance probes in the soil that calculate for evapotranspiration, which is the movement of water into the air from the soil, and weather conditions. This provides useful information for farmers to know when to turn on and off their irrigation systems.

“It has made people aware of the impact of water conservation and that you can reduce the amount of water with the help of technology without having to sacrifice yield,” Ritz said. “Economists put up numbers on the board, and producers start to see dollar signs.”

Demonstration results and technologies are showcased every year in several different events. The TAWC hosts its annual field day in late August in Floyd County along with two or three smaller field walks during the growing season in May through July. The TAWC also is hosting the 2nd annual water college in January 2016 at the Bayer Museum of Agriculture. The college is open to anyone who wants to learn more about the TAWC and water conservation tools. There will be cotton, corn, and sorghum experts giving information along with a large number of vendors from the agribusiness sector. The college will feature Sid Miller, Texas Commissioner of Agriculture, as the keynote speaker.

These are just a few of the many education, outreach, and public relations initiatives taken by the TAWC, and their efforts have not gone unnoticed. In May 2015, The Texas Commission on Environmental Quality recognized the TAWC as one of the winners of the 23rd annual Texas Environmental Excellence Awards. These awards are presented to the most innovative and effective projects that strive to protect the state’s natural resources. Governor of Texas, Greg Abbott, provided a statement in recognition of this award.

In the cotton industry specifically, Rick Kellison said that the water conservation efforts have been made in order for producers to use their given resources as effectively as possible. Another goal is to improve results through knowing what their maximum daily water use is and how they can irrigate and expect good yields.

“In this region, water is the most limiting factor as far as production agriculture is concerned,” Kellison said. “We are dealing with a finite resource, and we have to learn how to do a better job of using irrigation as a supplement and to utilize it as judiciously as possible.”