TCGA Ginner of the Year 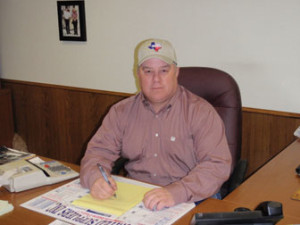 Dennis Flowers, general manager of Sudan Farmers Cooperative Gin in Sudan, Texas, comes from a long line of gin managers, and after 33 years in the business, he was named the 2010 Texas Cotton Ginners Association’s (TCGA) “Ginner of the Year.”

“I am very honored to accept this prestigious award,” Flowers said. “This really does mean a lot to me, and I am so happy to have earned it.”

After graduating from high school, Flowers went straight into the ginning business at Sudan Farmers Cooperative and never left. He started out as a ginner in 1977, then took on the job as plant manager. He was then promoted to gin manager, and for the past seven years, Flowers has been the general manager. “I started from the bottom and just worked my way up,” Flowers said.

Flowers followed his grandfather’s and fatherÕs footsteps in the cotton ginning business. His grandfather was the manager at Associated Cotton Growers in Crosbyton, Texas, and Flowers’ father was the general manager at Sudan Farmers Cooperative. For about 25 years, Flowers had the privilege of working side by side with his father.

Flowers’ father passed away this year which made receiving the Ginner of the Year award even more emotional.

“It was pretty emotional receiving this award,” Flowers said. “I would have liked to have had my dad there.”

Flowers’ son, Garrett, is now the manager at Spade Coop Gin in Spade, Texas, making the Flowers’ family a four generation legacy in the cotton ginning industry. This family tradition is something that Flowers cherishes.

“For some people, ginning just gets in your blood, and it’s hard to get out,” Flowers said.

Flowers’ wife of 31 years, Kelli, his daughter, Tiffany, who is a kindergarten teacher in Littlefield, Texas, and his son, Garrett, were present at the TCGA awards banquet to see Flowers receive his well-earned award.