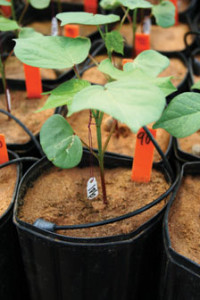 For decades, wind has caused harmful effects on cotton plants, often resulting in extreme damage and even death to the plant. This sandblasting condition sometimes can result in entire crops being completely destroyed.

In these cases, farmers may have to replant entire fields of cotton, impacting farming operations financially. The Agricultural Research Service (ARS) has been conducting USDA research in hopes of finding cotton varieties that may be more resistant to this type of damage.

The Agricultural Research Service is the principal scientific research group in the U.S. Department of Agriculture. Based in Lubbock, Texas, the ARS Wind Erosion and Water Conservation Research Unit studies the effects of wind sandblasting on stems, leaves, and plant roots. The research unit has laboratory wind tunnels where researchers can investigate different wind speeds, duration of sand blasting events, and the resulting effects on plants. The ARS began the current wind sandblasting research program in 2004.

Wind sandblasting occurs when wind passes over bare soil. Strong winds with high velocity often can pick up small particles of soil and blast them into cotton plants. These tiny particles can impact young plants, damaging leaves and stems. When sand abrasion occurs, plant cells are ruptured and the contents of the cells, including water, seep out of the plant. Sand abrasion also can damage the plant stem which can kill the plant outright. 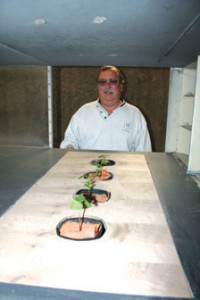 According to Dr. Jeffrey Baker, a plant physiologist at the ARS, this type of sandblasting damage usually occurs in the spring. Three conditions are occurring at this time: there are periods of high winds; farmers have plowed their fields for planting and the fields are nearly bare; and the emerged cotton plants are young, tender, and close to the ground.

Baker’s research studies the effects of environmental variables on crop plants, especially variables that cause plant stress such as lack of water or nutrients and other factors such as heat and cold.

He and other researchers at the ARS blasted seedlings with sand-laden 30-mile-per-hour wind. They studied the effects immediately and again after two and four weeks. They found that over the first two weeks the seedlings shifted their growth from root and leaf growth to repair and growth of injured stems. After four weeks, plant growth had returned to its state prior to the sand blasting.

According to Baker, from a scientific standpoint, windblown sand abrasion effects are very dramatic and rapid. The plants that survive are teaching researchers “interesting tricks” for how certain types of plants are able to recover more quickly from this type of injury.

“We’re looking at the whole problem, from the plant initially getting injured to what conditions lead to the plant actually dying, to how the plant ultimately recovers from this kind of damage,” Baker said.

Wind sandblasting leaves farmers with no option but to accept windy conditions and sandblasting as a detrimental and often expensive part of their operation. According to Baker, when farmers are forced to replant crops, it can double the cost of planting in terms of time, fuel and new seed.

He and other researchers would like to find cotton varieties that may be more resistant to this type of damage. Because of the research being done by the ARS, breeders someday will be able to choose cotton plants that can better withstand wind sandblasting.

“This would give cotton breeders insight into the types of plant traits to select that would help minimize this damage,” Baker said. “We are also experimenting with plant hormones, hoping to develop a recipe that farmers could spray on the crop or dip seeds in that would cause the plants to grow thicker and stronger stems.”