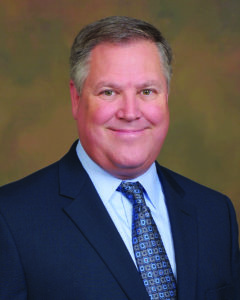 For more than three decades, Tony Williams has dedicated himself to helping cotton gins be safer and more profitable. That work has strengthened the cotton industry by fostering a robust business environment in the ginning segment of the supply chain. In April 2022, he will retire as Executive Vice President of the Texas Cotton Ginners’ Association.

Born and raised in West Texas, Tony Williams considers himself a Lubbock native. At the young age of 15, Williams’ father passed away. During this pivotal point of his life, he turned toward agriculture education to help fill the void left from a significant loss. He credits his love for agriculture to his high school FFA program and advisor at Lubbock-Coronado High School.

He stayed in Lubbock for college, graduating from Texas Tech University in 1984 with a Bachelor of Science in Agricultural and Applied Economics. He went to work for Monsanto in eastern Washington State shortly after graduating college. His work there remained in the agriculture production industry, focusing mainly on small grain wheat and barley.

Williams began working for the National Cotton Council when he returned to West Texas in early 1986 to be closer to his mother and sisters. In August 1988, Williams joined the Texas Cotton Ginners Association. About a month afterward, he became Executive Vice President of the organization he would lead for the next 33 years.

“I really had to hit the ground running and had to learn quickly,” Williams said. “I am thankful for the ginners and the opportunity they gave me at such a young age to run this organization.”

He married his wife, Lagina, in 2017 and became stepfather to her two children, Jayna and Jaxon. Jayna is currently following in Williams’ footsteps and attending Texas Tech University to obtain her Bachelor of Science in Agricultural Communications. Jaxon will soon graduate high school in Corpus Christi, Texas.

Williams and his coworkers are “representing the cotton ginning industry and cooperating with other organizations throughout Texas and the United States to maintain the economic vitality and security of agriculture,” according to the TCGA website.

As TCGA represents its members on both the state and national levels, Williams is at the forefront of making sure members have a voice in the Texas state capitol and Washington D.C. He works tirelessly to represent his members well and lobby for the overall benefit of the cotton ginning industry.

His career and love of agriculture came full circle when the Texas FFA Foundation asked him to serve on its Advisory Committee. Williams has also represented his members through several boards and organizations, including the National Cotton Ginners Association and the Texas Agricultural Council. Throughout it all, he does his best to make sure he has the most up-to-date agriculture information to benefit TCGA’s ginning members.

Under Williams’ leadership, TCGA has been working to solve industry problems for Texas gins while also advocating for them in legislation. Focusing on safety and regulatory compliance, they work to remove barriers and support members so they can gin each year’s crop efficiently and safely.

“I work with some great employees that make accomplishing this task for the industry possible. When I got involved back in 1988, the big issue was safety,” Williams said, “so, we developed a very comprehensive safety program, and we hired people to work in the field with us on safety. We took it a step further, and in 1994 we developed the Texas Cotton Ginners’ Trust, a self-funded workers’ compensation insurance program for cotton gins and other agricultural operations.”

Gin safety is not a passive issue for TCGA and TCGT. They have been working diligently to help solve these problems and assist their members through training, quality equipment, education, and more.

“These organizations take seriously their responsibility in helping its gin members address important safety issues. Gin plants incorporate machinery to process cotton, and like any highly mechanized process, it requires well-trained workers and well-guarded equipment. TCGA and TCGT help gin managers to address safety issues through ongoing education and being an advocate for changes in the industry that improve worker safety,” according to the TCGA website.

Williams is proud of how far TCGA has come as an organization and for helping its ginner members become compliant with employee safety regulations, labor laws, and pollution and emission laws and regulations.

While making compliance with regulations easier for TCGA members is a big victory, Williams also considers establishing the Texas Cotton Ginners’ Trust as a benchmark in his career.

“TCGT was born from within Texas Cotton Ginners’ Association,” he explained. “It is a stand-alone entity now, and I’m very proud of that – it has paid back over $50 million in dividends to the cotton industry. Though I am not the manager of it day-to-day, it was born from the association, and I am very proud to have been a part of that.”

He describes the cotton industry’s hard-working people to be like “one big family.” He says they are friendly, dedicated, and working for the good of the industry.

“Honest, hard-working ginners in the industry are what motivated me to continue to work hard and push forward for TCGA members every day,” he said.

Making a difference in ginners’ and farmers’ lives motivated Williams’ work at TCGA for 33 years. Williams would like to thank the TCGA members and the cotton industry for their support and encouragement through the years.

“Thank you for the opportunity to work in this industry, to work on behalf of the ginners. I am thankful for the ginners and the opportunity they gave me at such a young age to run this organization. I am very dedicated and loyal to them for giving me that opportunity and trusting in me to do the job and work for TCGA.”