Center Focuses on Education and Heritage 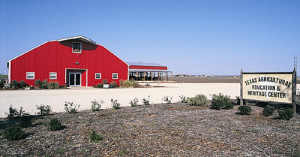 Wilfred Bartoskewitz moves with the speed and agility of a man half his age. He is, after all, a man on a mission to preserve the agricultural and German heritage of his area in South Central Texas.

Bartoskewitz, a fifth generation farmer, continues to raise crops and livestock on land his German ancestors purchased in 1856 less than three miles north of the present-day city of Seguin. However, each day brings urban encroachment closer to the flat and fertile land he loves.

With land developers gobbling up productive farmland in all directions for residential neighborhoods, Bartoskewitz and his wife Betty realized they had to act before the area’s agricultural and ancestral heritage was lost forever. So, in 2003 they donated 35 acres of their farm and built the first structure, a “big red barn,” for the Texas Agricultural Education and Heritage Center. They also donated a farmhouse built in the 1880s that now serves as a “bed and breakfast.”

“This center is dedicated to educating the public, especially school children, about the importance of agriculture in our society and to promote the heritage of farming and ranching in Texas,” Bartoskewitz says. “Young people and others who have grown up in recent decades know little about farming and ranching,” he adds.

The center’s first event, a week-long Agriculture Awareness Fair, occurred in October 2003 when it hosted school children from Guadalupe, Bexar, Comal, Hays and Caldwell counties. With the help of volunteers, the center provided the fourth graders demonstrations and presentations about farming and ranching. By October of the following year, approximately 3,000 school children and 3,000 adults had visited the center, according to Bartoskewitz.

“We work closely with Texas Cooperative Extension and Texas Farm Bureau for educational support related to the presentations and demonstrations,” Bartoskewitz explains. Other organizations providing assistance are the Texas Department of Agriculture, Master Gardeners, and Soil and Water Conservation Services.

“We welcome children of all ages from both public and private schools as well as youth organizations and church groups,” he adds. The center also is available to rent for meetings, birthday parties and wedding receptions.

Bartoskewitz serves as president of a nine-member board of directors that oversees the center’s operation. All board members have a special interest in agriculture, and although the first phase of the center has been completed, the board continues to raise money to complete the entire complex.

Along with education, the center is being developed as a tourist attraction. Future additions may include a blacksmith shop, old school house, church, general store, fire station and service station.

“Our plans call for the center to have the appearance of a typical old farming village,” says Bartoskewitz. “We also plan to add several wings to the red barn including a meeting room, and a farm and auto museum,” he continues. “Since many of the early farmers and ranchers in the area were of German descent, this German heritage will be a focus of the center, too.”

The center already has received donations of antiques and other farm-related items. In the meantime, Bartoskewitz continues to raise cotton, corn, grain sorghum, wheat and cattle on his farm.

“I hadn’t grown cotton for 35 years, but two years ago I decided to plant some just for the heck of it,” Bartoskewitz explains. “I had kept up with the changes in cotton production technology,” he adds, “but I was really surprised at the cost of inputs today.” Nevertheless, it seems no challenge is too great for this South Central Texas farmer.

With apparently boundless energy and a vision, Wilfred Bartoskewitz carries on a tradition born almost 150 years ago when his ancestors arrived in Guadalupe County, and he is working to ensure no one forgets what made that part of Texas successful. In less than two years, the Texas Agricultural Education and Heritage Center has made thousands of school children more aware and appreciative of the origin of their food and fiber.