For One PCCA Member Pheasants and Cotton Go Hand in Hand 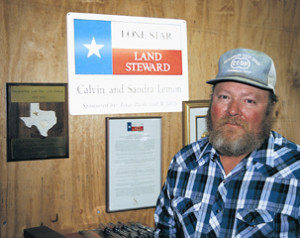 In a normal year, Plains Cotton Cooperative Association (PCCA) member Calvin Lemon is finished with harvest by late November. This past winter’s moisture and late harvest season, however, saw Lemon pulling double-duty overseeing his cotton crop and his pheasant hunting operation during the month of December.

Lemon has produced cotton with his wife, Sandra, for 30 years on his farm near New Deal, Texas, and in recent years, he has established and operated a pheasant day-hunting business. Growing up on a cotton farm in northeastern Lubbock County, Lemon and his brother, J.B., have hunted their entire lives. Today, the Lemon brothers own a joint farming operation, and Calvin owns three additional nearby farms on which he maintains an environment for desirable pheasant hunting.

“I started this as a hobby because I wanted to see the wildlife flourish,” Lemon said, “and when a drought hit, we were looking for another source of income.”

Lemon also explained the payment limits under the federal farm bill were a factor when he decided to start a new venture five years ago to create additional capital. 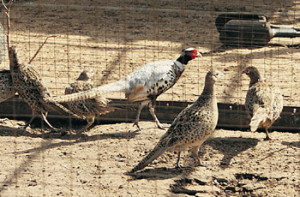 Before release, pheasants are raised in holding pens. Albino peasants, shwon above are rare. Photo by Jerod Foster

“I’m a hunter,” he said, “and most hunters are the true conservationists. They want to see the environment flourish.” This attitude may explain why Lemon has received various awards for his effort in establishing a fostering environment for local wildlife and practicing proper conservation techniques with his land. Among them are the Lubbock County Conservation Tillage Award and the Lubbock County Wildlife Conservationist Award. However, the one award the Lemons are most proud of is the 2002 Texas Land Steward Award, an award given by the Texas Parks and Wildlife Department recognizing a private land owner’s commitment to habitat and wildlife conservation.

“Personally, it has always been a passion to work with wildlife,” Lemon commented. “It’s nice to be recognized for your effort, and we appreciate the award.” Lemon’s wife, Sandra, a former 4-H grass judging coach, summed up the dedication it takes to achieve this goal. “You’ve got to love the land and wildlife to do it,” she said.

Lemon purchases approximately 800 chicks at Portales, N.M., in early May, and by hunting season, he will have 300 to 700 birds to release. Although the Texas Parks and Wildlife Department released wild pheasants in Lubbock and surrounding counties from 1964 to 1974, Lemon chooses to raise and release his own birds to ensure adequate numbers along with native pheasants for successful hunts.

“Through the years, the neck rings on the wild birds released by Texas Parks and Wildlife have gotten smaller,” Lemon said, explaining how he identifies his pheasants. “The birds we release have a noticeable ring around their necks, and our birds also do not have the wariness that wild ones do.”

In order to successfully raise and maintain sufficient numbers of pheasants for his hunts, Lemon purchased three nearby farms in the past 14 years to establish a suitable environment. At the time he bought them, 50 percent of the land on two of the farms was in the Conservation Reserve Program (CRP) and already had a pheasant population. The established CRP and the existing playa lakes gave Lemon a base on which to build his own pheasant habitat.

“To raise pheasants, you must have cover, water, and some type of habitat for food because they rely not only on seed but insects as well,” Lemon stated. Food plots are essential items for establishing any type of wildlife environment, and to achieve returning numbers of pheasants, Lemon properly maintains the food sources he uses. He staggers the planting dates for each crop to ensure the pheasants have a readily available source of food.

“In a dry year, it doesn’t matter how much cover you have,” he said. “You need to have the resources, and the CRP keeps the birds coming back to us year after year.”

Cover, though, is crucial to the development of an adequate pheasant population. Lemon plants millet and red top cane to provide sufficient cover for the birds. These plants produce enough foliage and abundant leaves for the birds to have cover until grasses start to turn green on the farms. Lemon also established rows of trees for nesting areas and to further increase the attractiveness of his habitat.

“I’ve taken more of the non-productive areas of the farm into CRP to provide the birds ample cover for them to move,” Lemon said. “It also allows us to break up the land we farm on.” On one of his farms, he established three wildlife areas to “acclimate” the birds and create a nurturing environment.

“I start releasing females in August,” Lemon said. If overcrowded, pheasants face more risk of losing one of their trophy characteristics – feathers.

Using this method, Lemon can release pen-raised birds early and successfully transition them into the wild while also providing a familiar place for the birds to return after most farmers are finished with harvest. Prior to this time, the local cotton crop provides enough cover for the birds.

Although losses can result from predation and death by natural causes among Lemon’s pheasant population, his survival rate is high.

“They are very hardy birds,” he said. “Before they are 10 weeks old, you have to watch them carefully, but after that, you can’t stop them.”

Hunters come from various parts of the state including the Dallas/Fort Worth and Odessa areas as well as from Hobbs, N.M. He even guided a businessman from Alabama whose flight home was delayed and who read about the hunting operation in the local newspaper.

Although Lemon advertises in the local newspaper, his main source of communication to potential clients is through word-of-mouth. Lemon also offers various discounts to hunters. These discounts provide youth hunters and college students a more affordable way to experience a pheasant hunt. Since his days as the local 4-H archery team coach and being a lifelong hunter himself, Lemon sees the positive impact an activity such as pheasant hunting can have on today’s younger generation.

“I think it is very important for youth to get involved in hunting,” he said. “As a general rule, I give youth under 17 years of age a 50 percent discount as long as they have a paying parent or guardian along with them.” He also offers children age 10 or younger free hunts.

Located approximately 12 miles north of Lubbock, Lemon’s hunting operation offers advantages to those hunters who do not have time to get away for an extended hunting trip.

“Being this close to a larger city gives clients a convenient way for someone to come hunt with a dog and to work with their dog more than once a season,” he explained. When purchasing a hunt, customers buy the entire day for a set amount per gun. To provide convenience and more incentive to attend a hunt on his farms, Lemon provides a home-cooked meal in one of his barns. The facility can accommodate large groups of hunters such as professional groups hosting clients for the day. The building is what many of his customers call “The Butcher Shop” because Lemon spends some of his time processing his own meat for his family. However, the meat used to prepare meals for his customers always is purchased commercially.

“I just try to sell a pleasurable hunt that is recreational and enjoyable,” Lemon said. “As long as I make it a quality experience, people will come back. If they feel they got a good value for their money, they will take care of me.” Lemon’s hard work in creating a satisfactory hunting experience as well as establishing a successful pheasant habitat and population has paid off in more ways than one.

According to Lemon, the future for his pheasant hunting operation looks promising with expectations for increased exposure and clientele. The extra moisture, long harvest, and slight decrease in birds last season have not dampened his optimistic forecast for next winter, and he plans to receive his birds earlier than last year.

“This year, I’m going to have (the supplier) put me down on the list for what I need, and as soon as they have enough, have them sent to me,” Lemon explained. “The longer we have the birds, the more successful the program will be. So far, we’ve treated it as a hobby, but it’s getting to the point where it can be a money generating operation.”