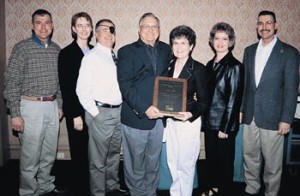 Jackie Mull (center) is joined by his family after he recieved the TACC Cooperator of the Year Award.

The Texas Agricultural Cooperative Council (TACC) recently honored three individuals for their dedication to the cooperative industry during the organization’s annual meeting in Galveston on March 14, 2005.

TACC named Jackie Mull of Idalou, Texas, Cooperator of the Year. Honored with the Ginner of the Year award was Gerald Miligan of Lyford, Texas, while Humberto Vela of Santa Rosa, Texas, was presented with the Distinguished Service award.

In 1980, Mull was elected to represent his local coop gin on the board of Plains Cotton Cooperative Association (PCCA). In just four years, he had earned the respect of his fellow PCCA directors, and they elected him to the cooperative’s executive committee. Two short years later, he was elected chairman of PCCA, a position he would hold for the next 18 years.

“Mull, was a leader from the get-go,” said Van May, former President and CEO of PCCA, “In high school, he was senior class president and president of the local FFA chapter. While in the FFA, he was one of the select few to earn the American Farmer degree- the organizations highest honor,” May explained during the presentation of the award.

Mull has served as an advisor to the National Cotton Council, on the Board of Directors of the Cotton Board, was a member of the Texas Bank for Cooperatives Stockholders’ Advisory Committee, a director of TACC and as a director of The Triangle Companies.

Throughout his farming career, Mull has always ginned with Idalou Coop in Idalou, Texas. In fact, he served on the board at the gin for 18 years and much of that time was the president.

“During his first six years as chairman of PCCA, I was privileged to serve under him,” said C.L. Boggs, former PCCA president. “This gave me a front row seat to witness his leadership and untiring dedication to PCCA members. Many difficult decisions had to be made, but he kept a steady hand and never compromised his cooperative ideas nor was he ever one to sit back and enjoy past successes,” Boggs concluded. 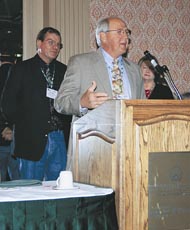 Gerald Miligan with his Cooperative Ginner of the Year award.

This year’s Cooperative Ginner of the Year is Gerald Miligan of Lyford, Texas. Delores Strader, the bookkeeper at Lyford Coop Gin said, “Anything this man touches, he can build or fix. Furthermore, he will never ask someone to do a task he’s not willing to do himself, and this is well regarded and admired by the employees of the coop. He may be seen digging out cotton during a gin fire, shoveling old grain out of the bin, or mowing the gin yard. The next day he might be in Washington D. C.,” Strader said.

Milligan accepted a position as manager at Lyford Coop Gin in 2001. In 2003, Lyford ginned 34,534 bales, more than any gin in the Rio Grande Valley. He also ginned the first bale in the nation that year, and this past year was the best year ever at 53,503 bales.

“It is obvious that Gerald Miligan is a jack of all trades, a family man, and a self-motivator, result oriented and much more,” said Stoney Jackson, executive director of the Texas Agricultural Cooperative Trust. “He is an accomplished individual. Winning awards for him doesn’t come often, but when they do, they are big ones. In fact, he may be the only person ever to win both the TACC Cooperative Ginner of the Year, and the Oklahoma Ginner of the Year awards,” concluded Jackson. 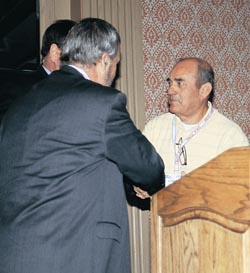 This year’s Distinguished Service award was presented to Humberto Vela. He taught school from 1965 to 1971, teaching World, U.S. and Texas History as well as World Geography.

“In whatever business he has been in, agriculture and his farm have always been a part of it,” remarked Charlie McQuae. After received a college degree in History and Government, with an emphasis in pre-law, Vela took a job as assistant ginner and scale man at the local cotton gin and grain elevator. After working in the gin for 10 years, he took on a new profession, and for the next six years he taught school. Realizing the teaching profession did not pay well, he bought and operated a service station. After running the service station for four years, a local independent trucking contractor approached him about working in the trucking business.

The day before Vela was to report to duty at his new job, the owner of the trucking firm died, leaving behind a contract to haul sugarcane from the field to the sugar mill. Although new to the company, Vela was asked to assume total responsibility on behalf of the trucking company to fulfill the obligation of hauling the entire sugarcane crop. Jack Nelson, the CEO of Rio Grande Valley Sugar Growers approached Vela about coming to work for the coop on a full-time basis as transportation supervisor. Vela has spent 31 years at the coop advancing from total transportation responsibilities to becoming harvesting and transportation superintendent for eight years and the last 20 years as director of personnel and public relations.

“In 1998, Vela was elected to serve as the Texas Agricultural Cooperative Council president. Since that time, he continues to provide great support and leadership to coop direction in the state,” McQuhae said.

According to Vela, one of the greatest highlights in his career came in 2000 when he was asked to accompany Texas Agriculture Commissioner Susan Combs on a trade mission to South America. For two weeks, he traveled with the commissioner to Brazil, Argentina, Chile and Peru.