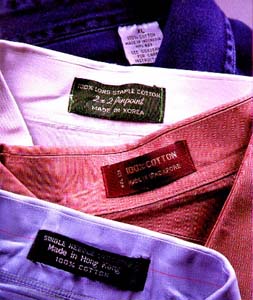 The U.S. textile industry is currently in the midst of a battle to regain market share. Domestic manufacturers indeed face a formidable opponent as imported Asian textile and apparel products continue to flood into the U.S. market. Recent statistics demonstrate just how serious this problem has become.

The U.S. Department of Commerce reported on January 21 that imports of textiles and apparel during November 1998 were 13.6 percent higher than the same month in 1997 as measured in square meter equivalents. The textile imports last November also were 13.6 percent ahead of the levels for all of 1997, while apparel imports registered an increase of 13.5 percent.

The American Textile Manufacturers Institute (ATMI) recently reported those increases are in line with recent trends. During the first 11 months of 1998, for example, textile imports rose 13.8 percent, and apparel imports rose 14.1 percent for a combined increase of 13.9 percent over the same period in 1997.

A large percent of the increases came from Asia and is a direct result of devalued currencies, especially in Southeast Asia, which were brought on by the ongoing financial crisis there. Imports from South Korea jumped 26.5 percent through November and Japan was up 28.8 percent, according to ATMI. In addition to those increases, the seven countries that comprise the ASEAN (Association of Southeast Asian Nations) collectively posted a 22 percent increase. ATMI added that only China, which has not devalued its currency, is exporting textiles and apparel below 1997 levels.

The financial crisis in Asia that caused the surge in imports has had a directly opposite effect on U.S. exports. During November 1998, exports of textiles and apparel, measured in dollars, were 8.7 percent below levels of a year ago. Textile exports were off 7.5 percent and apparel exports dropped 9.9 percent.

“Without question, the U.S. textile industry and its workers are in a difficult, trying period,” ATMI President Doug Mills said in a recent edition of Textile Trends, a weekly publication for its members. “However, we cannot allow a short-term economic crisis in Asia to affect the long-term progress of our industry,” he continued.

Many involved in the textile industry now are calling for U.S. government action to restrain Asian imports by moving against countries that deliver their products in the Unites States and then, in turn, shield their own industries behind high tariffs and non-tariff barriers.

The current state of the U.S. cotton, textile and apparel industries can be compared to a similar period in the 1980s which gave rise to programs such as “Crafted With Pride in USA” and “Grown and Made in the USA” to create greater consumer awareness and demand for U.S. cotton products. Once again, U.S. textiles will rise to the top of the stack if Americans begin to show pride in products made at home and purchase only U.S. textiles and apparel.