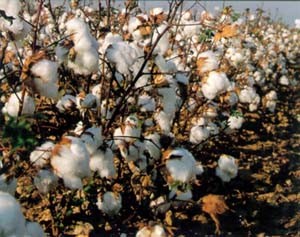 With a significant amount of the 1998-99 cotton crop still unsold as of March 17,1999, some in the industry have remarked that it has been one of the most difficult years in recent memory to market cotton.

“The intrinsic value of the cotton market versus the loan makes hedging virtually impossible, so producers have been either at the mercy of the market at harvest or hoping for a rally in the spring,” one analyst said.

Marketing decisions have been incredibly difficult with the cotton market in a state of continual flux. Major currency devaluations in 1997 and 1998 plunged many Asian countries into a recession, sharply cutting purchasing power and leading to reduced imports of U.S. cotton. Therefore, the United States was left with growing cotton supplies and no home for much of them which triggered a sell-off in the market.

U.S. cotton futures recovered somewhat in the summer of 1998 when the market focused on a drought in Texas growing areas and the possibility of a large decline in the domestic crop, but continuing low world demand forced cotton prices lower once again. The financial problems in Russia in the fall of 1998 and in Brazil this past January also contributed to dropping cotton prices.

Another major blow to the U.S. cotton industry came in mid-December with the expiration of USDA’s Step 2 cotton export subsidy program with the entire $701 million allocated for the subsidies totally exhausted. More recently, the triggering of Step 3 import quotas in March have allowed more cotton into the United States and added further pressure on cotton prices.

The cotton industry has made the revival of Step 2 a top priority, noting that the program enhanced U.S. cotton consumption and exports. In March, U.S. Representative Larry Combest, chairman of the House Agriculture Committee, endorsed a $1.0 billion request by the U.S. cotton industry to restore cotton export subsidies for the next three years.

Most in the cotton community are optimistic about the reinstatement of Step 2, and agriculture leaders in Congress are supportive to the industry’s efforts. But the road to the Step 2 goal appears to be a long one, especially as questions remain over how the subsidies will be funded.

Meanwhile, more foreign cotton now is entering the United States. With the completion of 10 qualifying weeks toward the initiation of Step 3 imports, the first quota opened on March 4 to permit the purchase of 195,430 bales. The quota is equal to one week’s supply of upland cotton consumption based on domestic use during November through January. Quotas will continue to be triggered if the spread between the price for U.S. cotton and the Cotlook A Index, a weekly average of the world’s cheapest cotton prices, is more than three cents per pound.

Significant quantities of foreign cotton already are flowing into the U.S. as recent market rallies provided an opportunity for merchants to purchase a substantial amount of cheaper world cotton. The merchants now are aggressively marketing the cotton to U.S. mills under Step 3 provisions.

Imports cause concern for many cotton growers who remember the plunge in cotton prices a few years ago when Step 3 quotas remained open for a long period of time. Growers are worried that the entry of foreign growths into the United States will apply more pressure to the market and push cotton prices lower.

As for the spot cotton market, volatility is expected to continue indefinitely. Very little 1998-99 crop cotton of high quality remains to be sold, and producers are reluctant to sell the balance of their cotton at current price levels. One analyst noted, “The remaining Texas/Oklahoma cotton is unable to compete in the world market without Step 2 funding. There simply isn’t a demand for that particular type of cotton at the moment especially at the prices producers must receive to break even.”

In spite of lower cotton prices, U.S. growers are expected to increase the amount of cotton planted in the 1999-2000 season. Despite facing difficult marketing decisions due to ongoing concerns about the Asian economy, the uncertain reinstatement of Step 2 funding, the unpredictable demand for cotton and the ever constant threat of adverse weather conditions, growers still are optimistically sticking with cotton.

“Cotton prices still are better than those of other commodities, so I’ll stick with it,” one Texas High Plains producer explained. Echoing the thoughts of many others, he added, “Besides, I’m a cotton farmer; that’s what I do.”