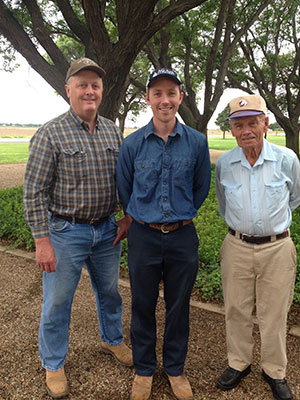 The Adams’ Legacy of Farming

Sitting at his kitchen table, Powell Adams reminisced on his lifetime of memories. From building his own home to always instilling a passion for life, family, and farming, Powell has built a legacy his family is proud to carry on.

“It was all very, very special,” Powell said. “Not many people get to work with their granddaddy, and their daddy.”

Not only did he have the opportunity to work with his brother, his father and his grandfather, he also has been able to farm with his son and grandson. Six generations of Powell’s family have chosen to continue the family legacy of farming. Powell said he began farming in 1937, and he still helps out when needed. There are not many people that started farming in the 1930’s that are still driving a tractor.

“Farming was my job, but if you enjoy it you don’t ever have to go to work,” Powell said.

Powell remembers when his father, the late W.T. Adams, bought a Farmall tractor with steel lugs and iron rims that could pull two-row equipment. His father adapted the tractor to have rubber tires and to be able to pull four-row equipment.

“Then, when I got a little older, they had come out with some tractors that had rubber tires. My daddy bought me a Model B John Deere with two-row equipment. It hand cranked on gas and ran on kerosene. None of the tractors had a battery. Daddy had a four-row tractor, and because I had a two-row tractor, I had to make a round to get the four-rows. We thought we were in high cotton,” Powell said with a smile.

Before the invention of the cotton stripper, Powell remembers the days when cotton was pulled by hand, put into sacks, weighed in the field and then taken to the gin in trailers. He said they would start harvest before the first frost, and then they would have to go back through the field to get the cotton that opened after it was pulled the first time.

“When we were pulling cotton, Lubbock was booming because of the temporary labor,” Powell said. “Then we got cotton strippers and didn’t need the extra labor anymore. If you had a good, hard working preacher in your crew, you could get a lot of cotton harvested because he would sing his sermon in the field. He would sing and the crew had to stay close enough to hear him. If he was pulling fast, they would have to pull fast to keep up with him. We had a good, fast pulling preacher that worked for us during harvest.” Another change Powell has experienced in his lifetime is the advances in gin technology. 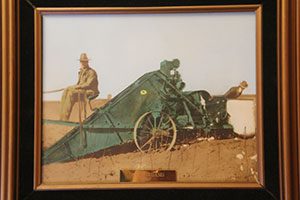 Powell’s father, the late W.T. Adams, was one of the first to test an experimental John Deere one-row cotton stripper pulled by mules in 1927.

“Our gins have changed something radical. We used to have two gins at Liberty Gin, and we would get along pretty good. Now, we have one gin with very little labor,” Powell said. “It is mostly automatic. The gin will kick out around 40 bales of cotton every hour. It is awesome. It is fast and efficient. They used to gin three or four bales an hour and think they were doing pretty good.”

Powell said from the time his son, Richard, was old enough he was telling him that he wanted to drive a tractor. One day, he decided it was time for Richard to learn and told him to go plow the ground in one of their fields.

“His eyes lit up when he got on that tractor,” Powell said with pride. “Come suppertime, he wasn’t here. But in a little while he came in and said, ‘Daddy, you didn’t show me where the light switch was, and it was going to get dark so I had to quit.’ He thought he was ten feet tall when he walked in that back door. It was so fun, and I enjoyed it so much. He’s still farming.”

Richard said his favorite part of working alongside his family is seeing the technology change over the years and learning from their experiences.

“When my granddad was around we were out there with no cab running four-row equipment, or maybe even two-row equipment when I was just a little boy,” Richard said. “Then you saw the progression with my dad and technology changing, but just learning from them has been great. It is a learning process, and every year is different. Working with my dad, granddad and uncle, you get a different perspective from all of them because everybody is different.” Carol Adams, Powell’s wife, said one thing that makes their family unique is their ability to fix things themselves.

“They can make or fix anything themselves so they don’t have to hire as much repair work done,” Carol said. “If something breaks down, they are able to fix it and go on. That is what was instilled in them. They were taught to do it themselves, and that is where they saved a lot of money and could put it back into the crop.”

Powell said in his experience he thinks working with cooperatives is a good business decision and helps ensure the future.

“The farmers run it and if it makes money, the farmer makes money,” Powell said. “I think it’s the way to go. I have had both ways. I have ginned at the coop and ginned at the independent. It didn’t take me long to figure out where my interests were. I just don’t see any other way for them to stay in business.”

Andrew Adams, Powell’s grandson, said it is very relaxing to get to work with his family every day. He said he has a special bond with his father and grandfather.

“You know your family and you know that they will accept you and love you in the good and bad times,” Andrew said. “With my granddad, it is neat because of how much he has seen and how much he has gone through. He has a lot of stories that I can learn from, not just in farming, but also in life.” Powell said he is proud that his son and grandson wanted to carry on the tradition.

“My grandson, Andrew, wanted to farm and had been helping his dad Richard farm after he graduated from Tech,” Powell said. “I decided to retire from the day-to-day work on the last farm I had been working. So I turned that farm over to Andrew to work. He is a great farmer. We couldn’t get by without him. He can handle all this modern electronic equipment a whole lot better than I can. We didn’t have anything like this when I started farming, and now we use air conditioned tractors that are guided by satellites.”

Andrew said he wants to give his sons the opportunity to farm, but more importantly, he wants to pass on the values and work ethic his father and grandfather instilled in him. He said they are both hard workers but know that it is just farming and it is just money. 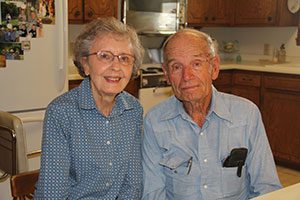 “Family is more important,” Andrew said. “My dad modeled that when I was growing up because I know there were times he had long days, but he still went out there and played baseball with me. That has helped me with my boys to understand there are things I need to not get so stuck in. It is just a job. Also, to realize that people are more important than just making money.”

Perseverance is one of the many things Richard said he learned from his father and grandfather that has stuck with him through the years.