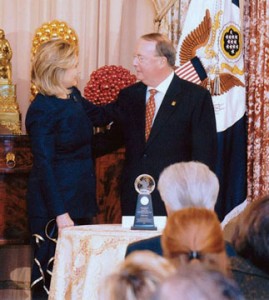 The award was presented to PCCA President and CEO Wally Darneille by Secretary of State Hillary Rodham Clinton.

“We’re here to honor American companies that stand out for their efforts to improve lives around the world,” Clinton said in her opening remarks at the ceremony. “They also represent the best of what American business has to offer. They are generous, inventive, and effective.”

For more than a decade, the ACE Award has recognized U.S. companies with international operations that demonstrate good corporate social responsibility. Past recipients of the ACE award include Cargill, General Motors, Motorola, Chevron/Texaco, and Ford Motor Company. These distinguished recipients represent the vital role that U.S. companies play abroad as good corporate citizens. 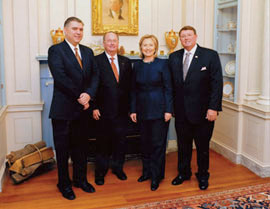 Clinton presented the award to PCCA President and CEO Wally Darneille at the ceremony. Darneille graciously accepted the award on behalf of PCCA’s stockholders, employees, board of directors, and management team.

“We are extremely proud that Denimatrix has been chosen for this award,” Darneille said at the ceremony. “It is very fitting that they have been honored for their corporate social responsibility and their environmental stewardship.”

Clinton explained that when Denimatrix was nominated for the ACE Award, they were really touted for the exemplary care they show for their employees, their respect for the local community, and their commitment to the environment.

Darneille said that social responsibility and environmental stewardship are critical to a company’s success and by providing a stable and desirable workplace, PCCA can attract employees whose productivity will make them competitive in a global economy.

“This award means a great deal to us about the future as well as the past,” Darneille said. “It is a recognition of the dedication of several generations of stockholders to doing the right thing for present and future generations.”