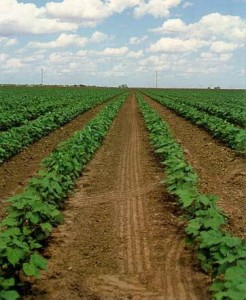 Views are mixed as most of the 1997-98 U.S. cotton crop is now up to a stand despite a somewhat rocky start. Unfavorable planting weather throughout most of the nation left much of the U.S. crop several weeks later than usual.
Although the harvest is months away, at this time it appears the cotton crop will make a comeback. Any effect on the 1997-98 marketing season remains to be seen.

In fact, Oklahoma growers were harshly affected by the early season rains and battled to plant their cotton before it became too late to make a successful crop. Conversely, High Plains producers have been fortunate enough to plant most of their cotton on time, and the crop appears to be off to a good start. Although the cotton will not be out of the field for quite some time, analysts and traders alike have cautiously voiced their high hopes for the High Plains cotton crop.

“Currently, we are finding the condition of the High Plains crop encouraging, but we are entering a critical time frame as far as weather conditions and crop abandonment are concerned,” Stanford adds.

Further south, cotton acres appeared to have decreased, but observers there are looking forward to a successful crop after a hugely disappointing harvest last year. According to one Central Texas analyst, cotton acreage in his area is down 35 to 40 percent due to early corn and grain prices, wet conditions and boll weevil concerns.

“Cotton producers had a lot to consider before planting this year,” he says, “but those who stayed with cotton could be rewarded with higher yields than in 1996 because the crop is in excellent condition at this time.” His remarks are mirrored by a trader in the Texas Lower Rio Grande Valley. “We are upbeat and positive about the crop in this area,” the observer notes. “Although our crop is a bit late, we anticipate the cotton to mature quickly with suitable weather conditions,” he adds. The effects of weather on the cotton crop will be the main focus of most cotton market observers for the rest of the season.

“The market most likely will remain very sensitive to weather related issues,” according to Stanford, who believes the cotton supply will determine cotton price in the upcoming year. He expects world demand for cotton to remain steady even though cheaper man-made fibers have impacted Asian demand.

The International Cotton Advisory Committee (ICAC) also expects a healthy demand for cotton as their May 30 statistics indicate a slight decrease in production and an increase in consumption for 1997-98. World cotton production was pegged at 88.1 million bales for the upcoming crop year, while ICAC expects world cotton use to rise to a record 89.2 million bales.

These projections are much higher than those of USDA, Cotlook, and many analysts. Nonetheless, ICAC argues that the consumption increases are mostly in large cotton-producing countries, such as India, Mexico, Pakistan and Turkey. The committee contends that it expects increased consumption because of strong world economic growth, population growth and consumer preference for cotton products.

Stanford agrees that demand for cotton certainly is growing in Mexico and other Latin American countries. He mentions that Brazil has taken an interest in U.S. cotton in recent months, and some traders are looking to Argentina as a potential U.S. cotton importer as the crop in that country was much smaller than expected.

ICAC’s latest report surprised most in the industry as 1996-97 world ending stocks were estimated at 42.1 million bales, including 17 million in China. The actual number of carryover bales in China is debatable since the cotton is scattered all over the country in mills, warehouses, military storage facilities and on farms. Therefore, the cotton is not “visible” to visitors touring China.

Traditionally the world’s largest cotton producing country, China continues to be the “big unknown” in the international cotton market as very little information concerning its amount of carryover or the size of its new crop is available. However, some believe less cotton will be planted this year due to a buildup in carryover stocks in that country which have made grain prices more attractive.

The situation in China and worldwide weather concerns definitely will hold captive the attention of market observers until the 1997-98 crop is harvested. But despite a late cotton crop in the U.S. and questionable statistics in China, the coming season appears promising.