The Texas Agricultural Cooperative Council (TACC) recently honored four individuals for their dedication to the cotton and cooperative industries during the organization’s annual meeting in Arlington, Texas.

TACC named R.D. McCallister of Acuff, Texas, Cooperator of the Year, and Ginner of the Year was awarded to Randy Arnold of Associated Cotton Growers in Crosbyton, Texas. TACC presented Jackie Dane of Amarillo, Texas, and Jack Nelson of Santa Rosa, Texas, with Distinguished Service Awards.

McCallister is a life-long resident of Lubbock County where he began farming in 1951. He attended both Roosevelt High School and Texas Tech University. He also served in the U.S. Army from 1955 to 1957. He is a charter member of the Roosevelt Volunteer Fire Department and is a strong supporter of 4-H and FFA chapters in his community.

“He is a strong family man, a community leader, a person who has never met a stranger and an outgoing person who everyone likes and respects,” Compton Cornelius, chairman of the board of Associated Cotton Growers, said. 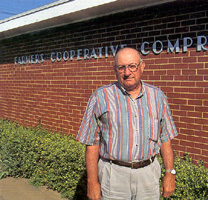 “He was a member of a local coop gin board for many years,” Rex McKinney, former manager of Farmers Cooperative Compress, said, “including a time when some folks thought the coop would not survive. But it did, through good work and planning by the board. No coop manager ever had a better board chairman.”

McCallister also has been active in other organizations. He was chairman of the board of Growers Seed Association in Lubbock, and he has served on the South Plains Electric Cooperative Board since 1969. He has served on TACC’s Board for almost two decades and served on the Cotton Board from 1998-2001.

Cooperative Ginner of the Year Randy Arnold took an interesting career path after he completed his education at Texas Tech University in 1973. After graduation, he moved back to his hometown of Spur, Texas, where he became a loan officer for Production Credit Association (PCA). He also began farming and raising cattle.

After several years with PCA, he began working for the General Land Office, but the long hours away from home took time away from his family. In 1987, he left the state agency and took a job as manager of Farmers Coop in Spur.

“Shortly after I joined the staff of TACC, I called on the coop one morning in 1990 in an effort to recruit them as a member of our council,” Tommy Engelke, executive vice president of TACC, said. ” I was nervous and scared, so I just dove into conversation with Randy,” Engelke continued. “To my surprise, he was quite compassionate, open-minded and had a heart as big as Texas. Eventually, the coop became a member.”

“Randy was instrumental in my decision to become a coop gin manager.”Buzz Cooper

In 1995, the Board of Directors of Associated Cotton Growers recruited Arnold to work for them, and he accepted the manager’s job in March of that year.

“I was with an independent gin for years,” Buzz Cooper, current manager at Union Coop Gin, said, “and Randy was instrumental in my decision to become a coop gin manager. He has good work ethics, is highly thought of by co-workers and patrons and is an asset to the community.”

Jackie Dane, recipient of one of TACC’s Distinguished Service awards, is described as a pioneer, a leader and a family man. He graduated from Bovina High School and Texas Tech University. He then spent two years working on a master’s degree in education at East Texas State University in Commerce, Texas. 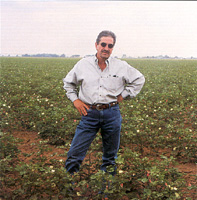 His first career move was to teach vocational agriculture for three years in Maypearl, Texas, and he later spent five years working for Taylor Evans Seed Company in Tulia, Texas.

In 1976, he began a five-year career with the Texas Feed and Fertilizer Control Service. In 1981, Dane began working for Farmland Industries as a fertilizer sales specialist. He furthered his career with Farmland by advancing to positions such as territory manager, petroleum marketing specialist, senior petroleum sales specialist and regional account manager.

“He is a friend, a mentor and will go beyond the call of duty to help anyone out,” Charlie McQuahe, CEO of Frontier Fertilizer and Chemical Company, said. “His duties are different now, but he still has strong feelings for the system and is continuing to contribute to agriculture and coops.”

Dane held many volunteer positions at TACC. He served as chairman of the Education and Member Services Committee, TACC secretary, vice president and president.

“If there were a title to be given to him, it would be ‘Mr. Cooperative of the 1990s since he helped guide so many of us through a great time of change in cooperative thinking and ideas,” said George Reed of United Farm Industries.

TACC also recognized Jack Nelson, retired CEO of Rio Grande Valley Sugar Growers, with a Distinguished Service award. Nelson was born in McClain, Texas, but was raised on a farm in Amber, Okla. He received both a bachelor’s and master’s degree in agronomy from Oklahoma State University in 1958 and 1959, respectively.

After beginning his career in 1959, Nelson worked in Hawaii, Puerto Rico, Iraq and South America, but most of his career was spent in Texas. In 1973, he was recruited from Colombia, South America, to serve as manager of a new sugar mill near Santa Rosa, Texas, in the Rio Grande Valley.

A former CoBank president credits Nelson with the success of the sugar mill. During the first few years of operation, the mill endured hard times, but with Nelson’s leadership, it grew to be the success it is today.

In 1982, Nelson was honored with the TACC Cooperator of the Year award, and in 2001 he was awarded the Texas A&M Agricultural Researcher “Friend of Texas Agriculture” award.

Nelson has spent 43 years in the sugar business, and 31 of those years were spent in Santa Rosa, Texas. He has served as the chairman of the board of the Sugar Association and the New York Sugar Laboratory. Today he serves on a variety of other committees including the Regional Water Planning Board for the Rio Grande Valley.