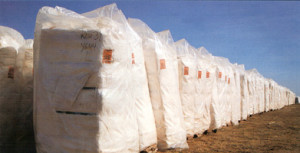 The warehouse division has experienced two high volume years back-to-back. The 2002 crop was just shy of the previous record that was set in 1990 with a total of 749,769 bales. In 2003-04, however, the crop broke the record with combined warehouse receipts totaling 763,102 bales, and OCCA expects an additional 17,000 bales will be received.

Although none of the coop gins that store cotton at RPCC had record-breaking years, according to Manager Gary Setliff, they all had good enough crops combined to deliver a record volume to the warehouse.

“You just can’t ever tell,” Setliff said. “Everything just worked right after replanting. We received 398,771 bales this year, barely breaking RPCC’s previous record which was set in the 1997-98 season with 397,089 bales,” Setliff added. Manager Jack Shepard from Farmers Cooperative Association Gin in Stanton, Texas, said some of his producers had to replant their 2003 crop three times due to adverse weather. 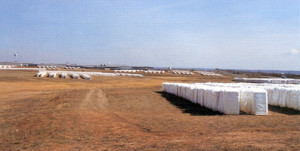 “It did set ginning back this year, but the rain received in late August really benefited the crop,” Shepard said. “The coop had a good year ginning 32,362 bales, but it did not surpass the 43,000-bale record set in 1997,” he added.

“Although none of the coop gins that store cotton at RPCC had record-breaking years, they all had good enough crops combined to deliver a record volume to the warehouse.”Gary Setliff

“The crop was late getting in, but the August rain saved us, and we had exceptionally warm fall weather with a late freeze,” Black said.

The late season rain and fall weather were just two of the factors that benefited the crop. The boll weevil eradication program also has played a huge role by enabling cotton plants to produce more bolls resulting in more pounds, Black said. Due to the record volume, RPCC had to lease additional warehouse space.

“Shipments have been going out very fast,” Setliff said, “and this requires more man power to break, block, stack and load the trucks. It was more cost effective to pay our employees for overtime rather than hiring additional, temporary labor.”

Unlike the Rolling Plains area, some gins in Oklahoma and Kansas did set records this year. Jay Cowart, OCCA manager, said the warehouse had received 378,980 bales in late April and expected several hundred additional bales to be delivered by the first part of May. According to Cowart, OCCA will record its second best year in the warehouse’s history.

“The boll weevil eradication program has benefited our producers, and they were able to manage their irrigation water effectively this year after a water conservation program was implemented,” Berry said. With some gins having record years, OCCA had to make adjustments to store the crop inside its 52 warehouses.

“All of OCCA’s cotton is stored inside,” Cowart said, “because the bales are restacked in the buildings in order to make every bale fit.”

The large 2003 crop in the Texas Rolling Plains, Kansas and Oklahoma compensated for production lost in the Texas High Plains last spring. Hail, wind, disease, and drought wiped out much of the cotton acres north of Lubbock, but with the increased production in the other areas, PCCA’s warehouses were able to record an outstanding year.