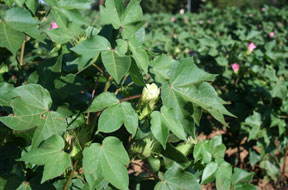 Adverse weather in Texas and other major cotton producing countries this season has added off-and-on support to the market as observers watch with interest to see what will happen next.

More than half of the projected 9.38-million-acre 2008 U.S. crop is expected to be grown in Texas, and continued concern over cotton development there hinges on the need for additional precipitation and no further damage from heavy storms, hail, or sand and high winds.

With heavy rain and winds up to 100 miles per hour, Hurricane Dolly came ashore on South Padre Island near the Lower Rio Grande Valley (LRGV), and moved inland on July 23, marking the first time the Texas coast has been hit directly by a hurricane in almost a decade.

Due to the storm, the cotton crop in LRGV, where the first cotton of the season is normally harvested, may be a total loss. Observers say approximately 92,000 acres of cotton in the region were awaiting harvest when driving rains and high winds smashed the open cotton bolls to the ground. Even if the bolls had remained on the plants, the quality of the cotton probably would have been severely diminished. In the meantime, analysts said the loss, while devastating for local producers, will have only a short-term effect on the market.

“The size of the world crop will remain a mystery almost until harvest is completed.”

The crop in the LRGV is not the only place where the production figure is somewhat vague at the moment. In fact, most traders are having a hard time coming to grips with an overall U.S. cotton production number. The hindrance circulates around the crop on the Texas High and Rolling Plains, where the bulk of U.S. cotton is grown, as many consider an accurate production figure for the region to be somewhat elusive.

Given the varied interpretations of how beneficial the hit-and-miss West Texas thunderstorms were in July, it is difficult to assess the condition of the crop there. After many days of temperatures over the 100-degree mark, the rain had to bring much needed relief to the crop despite the scattered hail and high winds that accompanied it, an observer explained. The general consensus is that some of the estimated 3.8 million acres planted to cotton in the region likely will be abandoned while the remaining acreage could finish the season with above-average yields.

“It’s such a mixed bag in West Texas that I don’t think anyone is going to have a good handle on a crop estimate for the area until September’s crop report from the USDA,” an analyst said.

USDA’s July supply/demand report held no surprises for the market. The department’s U.S. 2008-09 cotton projections included lower production and exports resulting in a net reduction of 100,000 bales in ending stocks compared with the previous month. U.S. cotton production was reduced 500,000 bales based on slightly lower planted area in the June acreage survey and slightly higher abandonment reflecting conditions in Texas.

The department raised domestic mill use 100,000 bales to 4.4 million. Despite the slowing economy, several factors are supporting domestic mill use including higher overseas transportation costs, the weaker dollar, and payments to mills included in the Food, Conservation, and Energy Act of 2008. Additionally, USDA’s export forecast was reduced 500,000 bales due to lower U.S. supplies and lower foreign import demand.

USDA’s world cotton projections for 2008-09 included lower beginning stocks, production, offtake, and ending stocks. World production was reduced approximately 1.5 million bales due mainly to reductions in India and the United States. The revision in India was based on lower reported planted area.

India, where the monsoon season is not arriving as producers there had hoped, is the U.S.’s largest cotton competitor and is working to make inroads to sell more cotton to China than American producers. The late monsoon season has resulted in a large number of unplanted acres, and a short crop in India could bode well for U.S. producers as world cotton supplies would tighten.

“If India’s cotton totals come up short, it could really make things volatile on the upside for prices to producers,” a market observer explained.

Cotton’s long-term price outlook remains very positive, according to many in the industry; however, no near-term burst in prices is expected. World cotton shortages certainly could affect global cotton prices, and the 2008 cotton season already has been fraught with adverse weather. The size of the world crop will remain a mystery almost until harvest begins. Until then, producers and analysts alike will, as they do most every year, have to “wait and see.”