At the Texas Agricultural Cooperative Council Annual Joint Cooperative Meeting in March, four individuals were honored for their commitment, service, and leadership to cooperatives. Each year, TACC recognizes those who have gone above and beyond to not only better the people and places they come into direct contact with over their careers, but also to note how their contributions have rippled outward, changing and bettering the world of co-ops. 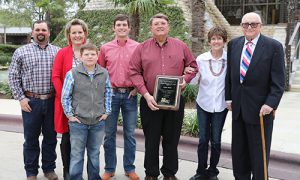 Cooperator of the Year: Eddie Smith

PCCA Board Chairman Eddie Smith received the TACC Cooperator of the Year Award. Credited with exceptional service and leadership that has placed him on many guiding committees and on the frontlines of the cotton industry, Smith is well respected among his peers.

Smith started farming after graduating with his bachelor’s degree in agricultural economics from Texas Tech University. Since then, his drive and desire to serve the industry has been unwavering. He has served on the PCCA Board of Directors since 1986, and in 2004 was unanimously elected chairman.

“His commitment to the cooperative system is woven into his entire operation. He is a vocal proponent of cooperative ownership not just because it makes business sense, but also because it is good for rural communities,” said PCCA President and CEO Kevin Brinkley. “His tenure on the Board of Directors at PCCA has coincided with remarkable innovations, dramatic changes, and policy debates on national and international levels. Through it all, Eddie’s foresight and leadership helped guide the cooperative through good times and bad while building a level of trust among PCCA members and fellow directors.”

Smith also has served the industry in other capacities: locally, he is a director of Floydada Cooperative Gin and a deacon at the Floydada Baptist Church. Nationally, he has served as Treasurer, Secretary and Vice Chairman of Cotton Incorporated, and completed the National Cotton Council’s Cotton Leadership Program in 1991. In 2010, he was elected Chairman of the National Cotton Council and has also sat on numerous NCC committees such as the Environmental Task Force. He is currently a delegate to the Council. Smith also has been a member of the National Council of Farmer Cooperatives’ Blue-Ribbon Farm Bill Committee, and served as NCFC’s Vice Chairman of the Trade Working Group. On a legislative front, Smith testified before the U.S. House of Representatives and the U.S. Senate Committee on Agriculture, Nutrition and Forestry in 2006 concerning the importance of maintaining existing farm policy. He is also a director for the Texas Agricultural Cooperative Council.

Smith has received many awards in pursuing the life he loves, including the 1998 Southwest High Cotton Award from Farm Press Magazine, the 2004 Gerald W. Thomas Award for Outstanding Agriculturist from Texas Tech University, the 2011 Distinguished Alumnus by Texas Tech’s College of Agricultural Sciences and Natural Resources, the 2013 Cotton Growers Achievement Award from Cotton Grower Magazine, and the 2007 NCFC Director of the Year Award.

Smith and his wife JenniSue have a son, Eric, daughter-in-law, Leigh, and two grandsons, Ethan and Logan. Today, he farms cotton and grain and raises cattle in partnership with his father, Ed, and son near Floydada, Texas. 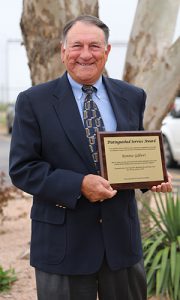 Considered a wealth of knowledge about marketing and trading cottonseed and cottonseed oil among his peers, Ronnie Gilbert has served both cotton producers and the land of the free in his lifetime. After he served on active duty in the U.S. Naval Reserves in the early ‘70s during the Vietnam War, he returned to his hometown of Lubbock, Texas, to attend Texas Tech University and graduated with his bachelor’s degree in business administration in 1975.

Gilbert’s career began shortly after graduating from college in 1975. He accepted a position at Lubbock Cotton Oil as a Controller, being promoted to Office Manager and then Sales Manager during his time there. Then, in 1984, he took a position in sales at Plains Cooperative Oil Mill, kickstarting his career in the cooperative industry. In 1990, Gilbert moved to Yazoo Valley Oil Mill in Greenwood, Mississippi, where he became Sales Manager. In 1998, he was named President of Soy-Cot sales in Des Plaines, Illinois. In 2002 Gilbert returned to Lubbock to serve as Vice President of Oil Sales at PYCO Industries, Inc., and was later promoted to Senior Vice President of Marketing in 2015, where he remained until his retirement in September 2018.

While serving the cotton industry across the country, Gilbert also served many industry organizations. In 2010, he was elected President of the National Cottonseed Products Association, and was a member of the Old Guard in 2007. He also has been a director and board member for NCC and TACC. Gilbert served on the advisory board of the Larry Combest Chair of Agricultural Competitiveness at Texas Tech, and is a former member of the board of directors for the Bayer Museum of Agriculture in Lubbock.

“I have had the privilege of knowing Ronnie for many years and can say without hesitation that he is very deserving of this award,” said Robert Lacy, President and CEO of PYCO Industries, Inc. “He has spent 20 years of his career marketing cottonseed oil and is considered to have more knowledge about trading cottonseed oil than anyone else in the United States.”

Gilbert and his wife, Kenan, currently reside in Lubbock and have four children and four grandchildren. 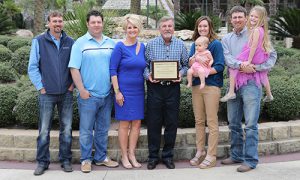 When someone thinks of the National Cotton Council in West Texas, one of the names and faces that comes to mind is that of Rick King – a friend to cotton farmers and gin managers alike who has always been a strong voice and steady hand for the Texas cotton industry.

A Post, Texas, native, King attended Western Texas College in Snyder, Texas, before transferring to Texas Tech University in Lubbock to earn his bachelor’s degree in agricultural education. After working as a student teacher at Lubbock Cooper High School in vocational agriculture, he went to work for NCC in 1979. To date, he has served the Council for 40 years and is currently a Member Services Representative.

Known for his ability to relate to agriculturists and persuasive charisma, King’s talent for connecting with people allowed him to serve beyond the cotton industry and into rural communities. He served as the President of the Old Timers Rodeo Association in 1986 and 1995 and was recognized for his service and dedication to the organization. King also helped start the rodeo team at Texas Tech by helping raise $250,000. In 1999, he received a Special Service Award from Slaton FFA. In December 2012, King was awarded lifetime membership to the Texas Cotton Ginners Association.

“Rick blends well with people from the country and he understands agriculture, especially federal farm programs and the cotton title of those programs,” said Tony Williams of the Texas Cotton Ginners Association. “In delivering remarks to a group, he is very convincing. I always say he has a certain charisma about him. If I had a dollar for every mile Rick and I have ridden together, I would be a blessed man – but I am anyway as I can call Rick King my friend.”

Rick and his wife, Debbie, live in Lubbock and have four sons and seven grandchildren.

Lubbock native Ed Landry has been noted to have set the gold standard for gin management. Though hailing from the High Plains of Texas, Landry was awarded the TACC Cooperative Ginner of the Year Award for his leadership in the cotton industry in the Rio Grande Valley.

Landry also has served more than just the cotton industry. After joining the Air Force in 1973, he was stationed in South Korea, Japan, Illinois, and New Mexico throughout his service. Landry found himself in South Texas after leaving the Air Force and going to work for his uncle’s Ford dealership in Raymondville, Texas, where his experience as a statistician from the military greatly served him in computerizing their parts department.

After marrying his wife Linda in 1982, the Landrys relocated to Paducah, Texas, to run a grocery store for his father. After it sold, it was back to South Texas to run another grocery store in Harlingen. Then in 1985, Landry accepted a position to run the general store for La Feria Co-op Gin and has been there since.

In his community, Landry has served on the first bale committee for the first bale auction, a scholarship program for students working to pursue degrees in agriculture. He and his wife are also supporters of the Algodon Club, which creates interest in the cotton industry through social activities, media publicity, and scholarships.

Landry and his wife live in South Texas, and their three children and two grandchildren live in the surrounding areas.