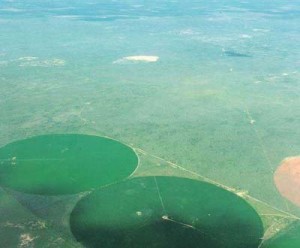 Irrigating corners of cotton fields not reached by center pivot systems has become less economically feasible as water tables decline, the cost of energy increases and commodity prices remain low. The cost of drilling new wells to compensate for reduced water flow from existing wells also is a factor in today’s economy.

As a result, many producers in recent years have re-evaluated their operations to determine if more crop yields can be obtained from water pumped for irrigation. The result has been a significant increase in center pivots that dot the landscape, according to the High Plains Underground Water Conservation District No. 1 in Lubbock, TX. The increased water use efficiency of center pivots makes it possible to maintain yields with less water pumped than with furrow irrigation, district officials say.

However, after pivots are installed, many producers feel compelled to irrigate field corners that require a greater per-acre rate of water than the rest of the field under pivot. In addition to requiring more water, corners are very labor intensive: every row is a different length, requiring a different amount of water to wet the soil evenly without resulting in tailwater. The water district also notes it is difficult to maintain proper timing to water the corners. Consequently, the yield usually is not as great on the corners as on the rest of the field.

Low Energy Precision Application (LEPA) center pivot systems are 95 percent efficient, while furrow irrigation is rated at 60 percent. Due to the myriad of problems associated with field corners, the efficiency undoubtedly is less than that. The water district contends putting water normally used for corners through the center pivot is more economical, according to the following example from the water district.

If it were possible to produce a uniform application of water which would wet the soil to the same level that can be accomplished with a LEPA pivot, it would require pumping at least 490 acre-inches of water on the corners. However, if that 490 acre-inches were applied to the 125 acres under the pivot instead, an additional 3.9 inches of water per acre could be applied through the LEPA system.

Especially in limited-water areas, the water district says, not watering corners and applying the water saved through the pivot should be given serious consideration. It could improve the bottom-line profit of many farming operations.