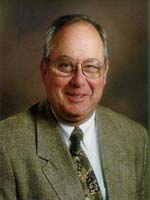 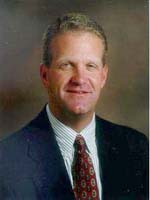 A number of staff changes at Plains Cotton Cooperative Association (PCCA) became effective June 1 to achieve a more balanced workload among the cooperative’s management personnel while maintaining a strong commitment to member relations.

Dean Church, former manager of PCCA’s Rolling Plains Cooperative Compress (RPCC) Division in Sweetwater, TX, was named Vice President of Grower Services, a newly created position. Church will be responsible for PCCA’s Field Services, South and Central Texas operations and TELCOT Center, and he will serve as liaison to the compress operation in Sweetwater.

Church joined PCCA in 1988 as field representative in Oklahoma and later was named assistant manager at the coop’s Oklahoma Cotton Cooperative Association compress facility in Altus, OK. He was promoted to the RPCC management position in 1995. Gary Setliff, an 18-year employee at RPCC, has been named manager of that operation. 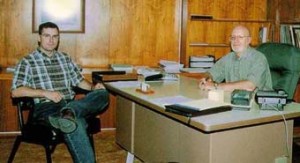 Gary Setliff (r) has been promoted to manager at RPCC. Scott Covey (l), former PCCA field representative, has been named assistant manager at the facility.

Long-time PCCA employee Jim Taylor has assumed the new title of Vice President of Administration and Human Resources. Previously, Taylor had served in several management capacities before being promoted to Vice President of Administration in 1992. His new and expanded responsibilities include communications, textile supply, textile environmental, payroll functions and human resources.

“We knew the acquisition of Mission Valley Fabrics in 1998 would put considerable pressure on our management functions,” PCCA President and CEO Van May said. “These changes should allow us to achieve a better balance among our management and bring more time and talent to bear on some of the areas which have been strained since we acquired Mission Valley. As always, our intent in any change is to enhance our ability to fulfill PCCA’s mission; ‘to add significant value to the cotton marketed for our members…,'” May concluded.