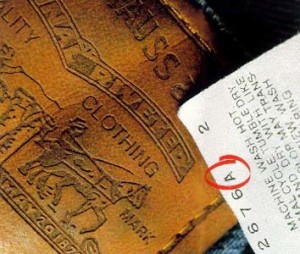 To locate Levi’s jeans made from American Cotton Growers (ACG) denim, check the inside tag such as this one. If the series of numbers contain the letter ‘A,’ the denim was made at ACG, a division of Plains Cotton Cooperative Association (PCCA).

Denim is a versatile fabric: soft enough to be comfortable yet tough enough to withstand many years of wear and tear. In much the same way, denim makers across the country now are weathering revolving storms in the market by being flexible enough to adapt to new consumer expectations while remaining consistent in their commitment to quality.

Recently, Levi Strauss & Co. (LS&CO.) caught the attention of national and local media who reported the apparel company has slipped in popularity among young buyers. The loss of market share has forced the company to make dramatic changes, the effects of which can be felt both within LS&CO. and on several manufacturers across the country that provide denim to the company.

The attack on LS&CO. sales has come from both hip, upstart labels, which are small and nimble enough to shift their focus to keep up with the latest designs, as well as some of the country’s largest retailers which have broken into the mainstream market with their own private label jeans. Shifts in consumer preferences, including an increased demand for khaki pants, also can be blamed for LS&CO.’s current dilemma.

The recent announcement of LS&CO.’s plans to close half of its remaining U.S. plants and move much of its production to Mexico or the Caribbean Basin has not sent most of its major denim suppliers into a state of panic. Instead, they are preparing to meet the new challenges that lay ahead of them by slowing production and waiting for a more desirable market opportunity. The general consensus among most suppliers is that the situation will be improved in the near future, and they expect to see a turnaround during the second and third quarters of the calendar year.

“It’s been rough since September. We kind of hit a wall,” John Heldrich, president and chief executive officer of Swift Denim, a division of Galey & Lord, said in a recent edition of “Women’s Wear Daily”, a textile and apparel industry publication.

“But we’re seeing some signs of improvement, we’re seeing five-pockets (jeans) start to generate more action and seeing a lot of interest in lighter- weight ring-spun and innovative colors coming back some, so we’re hopeful that we’re seeing a gradual improvement,” Heldrich continues.

G. Watts Carr III , president of Cone Denim North America, echoed Heldrich’s sentiments in the publication, saying, “We were a bit surprised by the (LS&CO.) announcement, but I don’t think that it’s going to have a big impact on our volume.”

In a reaction to the soft denim demand by LS&CO., several plants, including Cone Denim North America and the American Cotton Growers (ACG) denim mill, a division of Plains Cotton Cooperative Association (PCCA), have chosen to temporarily halt their production levels. The ACG denim mill, for example, has had several temporary closings during the current fiscal year, including a three week furlough in March and an extended shut-down during December 1998. If denim production at ACG had continued at a normal rate, the mill faced a burdensome inventory situation.

LS&CO. also is taking steps to help improve demand for its products, and continues to work on a number of new styles such as a new Red Tab line featuring “fashion-forward” basics in cargo, carpenter and other styles. The company reported that its soft jeans sales were boosted by solid results for its Slates dress pant line which has become the number one selling dress pant in U.S. department stores. The Dockers line also benefited from the industry-wide explosion in the khaki market.

In the past year, the company has been taking a reflective look at its operations in an effort to revamp its image, run more efficiently and ultimately boost sales. During the second half of 1998, LS&CO. moved to an entirely new business model: consumer-focused brand management. With its intense focus on the consumer, the new model is intended to enable the company to build its existing brands as well as a larger portfolio of brands.

As part of this new strategy, LS&CO. is devoting more resources to innovative marketing and product design in all of its divisions worldwide. LS&CO. also announced a restructuring in its strategy to become more consumer focused and marketing driven, rather than relying on its relationship with retailers to sell jeans.

Denim is a fashion staple to most American consumers. According to Cotton Incorporated information, the average American owns approximately 15 denim items which they wear an average of 4.29 days a week. Statistics such as these prove that denim has what is takes to survive in all market conditions, both good and bad.

“There will always be comets and shooting stars,” Levi spokesman Gavin Power said recently, “but we’re here to stay and we have the financial resources to be creative.” That is encouraging news for PCCA members.