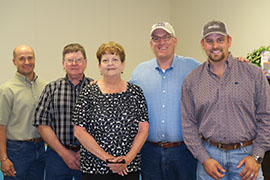 This one word summarizes Barbara Jones during her time at Farmers Coop Gin in Anson, Texas. As manager, she always strived to keep her producers happy and keep the gin running efficiently. This past May, after a nearly 20-year career, Jones retired from being gin manager and said she is going to miss the people the most.

“I think the best thing that made a difference in my life is the number of good friends I made that I would never have known without being at the gin,” Jones said. “So many of my producers and employees became close friends that I will never forget. I enjoyed all of my farmers, and I am going to miss them. That is the worst part about leaving.”

Prior to working at the gin, Jones was a teacher for 30 years. She began working at the gin in Anson in the fall of 1997 and worked part time on the scales. Then, she began working full time in 2003 and became the manager in 2005. Jones said she loved seeing the gin yard fill up with modules, but her favorite part of her job was having the opportunity to work with her husband.

“I was very glad that I was fortunate enough to work every day with my husband, Roger,” Jones said. “Roger was the manager of our farm store and was always my biggest supporter. I could never have done this job without him.”

Allen Hoelscher, PCCA Director of Member Communications, said Barbara was always a pleasure to work with and very dedicated to the gin.

“She was always very helpful with whatever we asked of her,” Hoelscher said. “During ginning season she usually stayed in a trailer at the gin. There were times that she would go for weeks without going home to sleep in her own bed or be able to check on things at her house. She was very dedicated to her job.” Jones said being a gin manager was demanding but rewarding.

“The most challenging part of this job would be making sure the gin was ready to go for the beginning of the season and finding enough qualified employees,” Jones said. “Also, those 14 hour days, seven days a week, for months was a big challenge. On the other hand, the rewards would be dealing with my producers, having a successful year, and seeing all of our patrons receive a nice dividend.”

During her time as gin manager, they made improvements to the gin, acquired additional acreage, and gained many new customers from several counties.

“I believe the secret to being a successful gin manager is to treat every producer equally and with respect,” Jones said. “The same would be true for my employees.”

In retirement, Jones said she is planning to enjoy the flexibility in her schedule and do lots of traveling.

“We are just going to take life easy and do some traveling,” Jones said. “Just kind of do what we want for awhile. It is really nice
to be at home and get up in the morning and decide, let’s go somewhere.”

Jones said working at the gin and developing those close relationships with the people enhanced her whole outlook on life.

“It is so pleasant to know that what you have done makes
a difference in a lot of lives,” Jones said. “That always made me feel really good that I did my very best to try to make my producers happy. When they were happy, I was happy.”