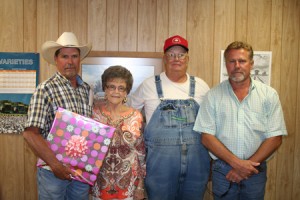 Ernestine receives a retirement gift from the gin manager and board, from left to right: Brady Mimms, Ernestine Stennett, Garry Haralson, and Joey Jenkins.

For 33 years, Ernestine Stennett was the backbone of the cotton gin in Acuff, Texas. Described as the nucleus of the community, Stennett was not just the local bookkeeper but also a friend to many. The gin office was her second home, where the people were family and her biggest accomplishment was having enjoyed every day of work. She was described as the “go-to” person for just about anything in Acuff.

Stennett was a stay-at-home mom when she came to work at the Acuff gin in the 1950s. She left the gin to take care of her kids, only working seasonally in the fall. At the request of the gin manager, she returned in 1981 and became the official bookkeeper of the gin in 1984. With 40 total years under her belt, Stennett worked at the gin for 33 consecutive years.

“This is kind of like home to me,” Stennett said. “I’ve spent half of my life here, and it has been a great place to work.”

In addition to enjoying every day at the gin, Stennett said another great accomplishment was learning the technology. When she first started, bookkeeping was done by hand and with PCCA just a phone call away, Stennett learned more than two different operating systems on the gin computers.

According to co-worker Sharon Brown, Stennett acted as a great friend, sister and psychologist since her first day in 1997.

“There is not one particular memory with Ernestine that stands out, it’s all of them,” Brown said, tearing up, “All of them are very special.”

Emotions became heavy when co-workers described Stennett. As a mentor, Stennett was an asset in providing education to fellow employees. Debbie Robertson, newest bookkeeper in Acuff, has been employed at the gin for roughly three years.

“She taught me a lot about the ginning business,” Robertson said. “There’s a lot, I mean a lot, that goes into being a gin bookkeeper, and she’s been very patient with me. I hope I can make her proud and do a good job.”

Robertson and Brown agree that they wish she were there every day with them but are managing without her “as best as possible.”

Stennett has been spending her time organizing and maintaining her home and spending time with Arlen, her husband, and their dog, Cuddles. As a mother of three, grandparent to seven, and great grandparent to five, Stennett rooted her family in the Acuff area and her retirement has included spending time with them. Stennett’s children Kathy, Cary and Gary all reside nearby allowing for easy visits, giving her the opportunity to keep a close eye on the gin.

“She visits several times a week, and we have even called her with questions we have,” Brown said. “She is always close by.”

As a seasoned gin bookkeeper, Stennett’s valuable advice is precious to her fellow employees. Through the struggles the gin had to face over the years, she explains that kindness is key for success when working with all the customers and gin employees. In the cotton industry, there are many factors that contribute to the attitudes of the people visiting the gin, and patience is necessary to continue to have a positive attitude.

When the 2014 ginning season began, Stennett got a call from Manager Joey Jenkins inviting her to come back to work temporarily, and she jumped at the chance.

“I know they can handle it without me, but I was so excited when they let me come back to help,” Stennett said. “I had wished they would need me again, but I’ll be happy to get back to retirement after the season is over.”