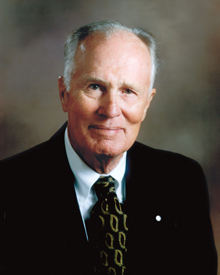 Charles Abernathy retired from his position as the District One representative to PCCA‘s Board of Directors in September 2007. His service to his fellow man started in the U.S. Army and continued as he became a lifelong farmer serving cotton producers as a coop leader for more than 45 years.

A graduate of Ozark High School in Oklahoma, Mr. Abernathy was living on a farm in Jackson County when he enlisted in the U.S. Army in 1943 at the age of 20, just 10 days after his and Mary’s wedding, despite having received a farm deferment from the Selective Service. He believed serving his country was something he should do.

Two years later, Mr. Abernathy and other members of the 27th Division of the 24th Army Corps participated in Operation Iceberg, the invasion of Okinawa, Japan, that began on Easter Sunday in 1945. Soon after landing on the island’s beaches, the 27th Division found itself facing 100,000 Japanese troops well entrenched in caves and other fortifications on higher ground. During the ensuing battle, Mr. Abernathy was credited with saving the lives of many fellow soldiers, and he continued to fight for three more days despite a serious leg wound. Consequently, Mr. Abernathy was awarded the Silver Star for bravery and the Purple Heart for wounds received in combat.

Following the war, Mr. Abernathy returned to Oklahoma and his wife, Mary, where they raised their children, Crystal and Clint. He also became a successful farmer and community supporter and devoted time on behalf of his fellow cotton producers by holding leadership positions at Headrick Coop Gin and Oklahoma Cotton Cooperative Association. In 1953, Mr. Abernathy helped start Washita Insurance and is one of the only remaining original directors still serving on the board.

In 1995, PCCA Delegates nominated Mr. Abernathy to represent District One on PCCA’s Board of Directors where he served continuously for the next 12 years. During his tenure on the Board, PCCA’s trade territory increased, and the cooperative continued its legacy of industry leadership and success for the benefit of its members. In 2003, Mr. Abernathy received the “Legends of Agriculture” award from radio station KWHW and the First National Bank of Altus.