On the Wild Side of Cotton Research 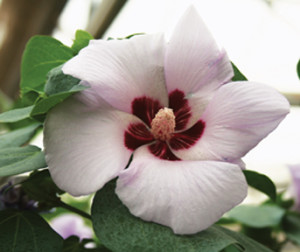 The United States Department of Agriculture announced in early November that the 2007 cotton crop is record breaking in terms of average yield and quality due to favorable weather and ground-breaking research scientists have conducted in recent years to improve cotton varieties. In Lubbock, some of those researchers today are exploring the benefits of wild cotton. Some traits and genes in these non-cultivated plants have the potential to dramatically change the industry once again.

The goal of the project is to screen the cotton to find traits, and eventually genes, that would be desirable for commercial production. Desired traits could range from drought tolerance, salt tolerance, cold tolerance, nematode resistance, and others that could be vitally important to cotton farming.

“The gene pool in commercial cotton is narrowing,” Mark Arnold, entomologist and a research associate at the Texas A&M University System Agricultural Research and Extension Center in Lubbock, Texas, explained. “The wild cotton, by contrast, has a very wide genetic base.” 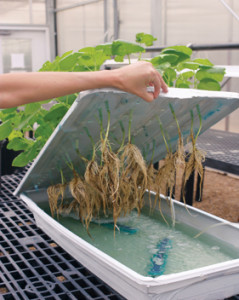 A sample of the hydroponic research testing for salt tolerance.

Scientists at the center in Lubbock are studying the genetics of numerous wild species of cotton. Ideally, the search will lead to the specific genes that could change things positively for producers whose crops could suffer from drought, cold temperatures, salt contamination, and other common perils. Dr. John Gannaway, Texas Agricultural Experiment Station cotton breeder and professor for the Department of Soil and Crop Science at Texas A&M University and Adjunct Professor at Texas Tech University, is researching what benefits these plants have to offer.

Gannaway explained that the USDA Agricultural Research Service in College Station, Texas, provided the seeds to begin the research. Other seeds were collected from France and Uzbekistan. Once scientists have the accessions, the cotton in the collections, they must increase the crop since they are only given a small amount of seed to start. Plants are grown in a greenhouse because most cotton is photoperiodic and, otherwise, will not produce fruit and seed during the short days of winter. As the plants mature, researchers begin the process of screening to identify desirable characteristics.

“If we find something of interest, we give it to a molecular geneticist,” Gannaway said. “He will then see if he can find those specific genes and try to incorporate them into the cotton we grow.”

The wild cotton project has been in existence since 2003. While they have not found those individual genes as of yet, Gannaway and others are confident they will. However, they have found some traits that are very promising. 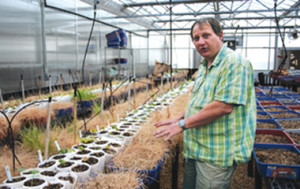 Mark Arnold explains the research being conducted with thrips.

Currently, the team has found promising traits of salt-tolerant cotton. Natalia Castillo, a research assistant and graduate student at the USDA research center in Lubbock, explained this could be incredible and very important in the near future as water for irrigation always is a concern. This is especially true for the areas of the world that continuously farm in the same area with high salt levels in the water. The Santa Rosa Aquifer lies underneath the Ogallala Aquifer. The Ogallala is heavily used accounting for almost all water usage on the Texas High Plains.

“The Santa Rosa may be 100 times larger than the Ogallala, but it is very salty,” Gannaway said. If the genetics can be found to produce a much more salt-tolerant variety of cotton, the Santa Rosa could be a potential source for irrigation. Gannaway also discussed the unusual appearance of some of the wild cotton.

“Some plants don’t even look like cotton. Some plants look like vines, some have no lint, and some have huge leaves,” Gannaway said. “People ask me why I work with it, and I tell them they might have genes for insect resistance or may have a beneficial trait we don’t yet know about,” Gannaway added.

The actual process of plant research is quite extensive. As the cotton is grown, detailed phenotypic characteristics are logged. The lint also is measured, analyzed and recorded. After the lint is ginned, it is characterized using an advanced fiber information analysis system. This cotton breeding information is entered into a genetic database which is shared with other scientists and can be accessed by the public.

Researchers also grow cotton plants in plastic PVC tubes. They measure the characteristics of the roots, shoots and leaves, and compare them to the normal cotton that they know is susceptible to a specific problem. The data could help discover which physical traits could lead to drought resistant cotton or could lead scientists to make more accurate trait selection in the future.

Some research also is being conducted on cotton being grown hydroponically -without soil- to test for salt tolerance. Castillo subjects the cotton to varying amounts of salt, ranging from small to very substantial amounts. Every 48 hours, the cotton is given five treatments of 92.1 grams of salt. After about three days, the team decides to continue based on how the cotton has done. Castillo and others have found that the wild cotton excretes the salt.

“We are trying to find the mechanism that excretes the salt and understand what is going on so that we might be able to use it,” Castillo said.

Other studies include work to identify natural resistence to thrips, Lygus bug, and aphids as well as disease resistance.

Arnold explained that while Lygus is more of a problem for producers in the Deep South, some scientists believe it may become an issue for producers on the High Plains. However, thrips, and aphids can be a severe problem in this area.

Mark Arnold explained that as far as the phenotypic research being conducted in Lubbock, in several accessions they have found what they are looking for and have identified those crucial traits. Now, the research will lie in the hands of molecular geneticists. Dr. Gannaway believes the work being conducted on cotton genetics is very important and very interesting. These very unique forms of cotton could be the answer to some of the oldest issues in the book, and that’s pretty wild.