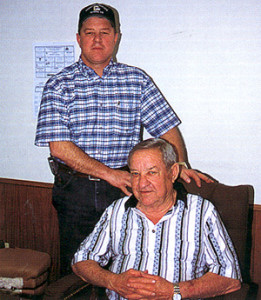 Flowers began his career at College Avenue Gin in Lubbock County and then went on to Lowake Gin before relocating to Sudan on March 15, 1972.

The coop at Sudan flourished during Flowers’ tenure and even broke a record for the number of bales ginned during the 2002-03 season, his last crop season there.

“We went from nearly nothing in my first year here in 1972 to a record- breaking crop in my last season,” Flowers said. “We’ve just gradually come up the hill.”

He said a lot of work and many hours have gone in at the coop, and he attributes his long, successful career to “hard work and good living.” Flowers said he does not know what he will do during his retirement years, but so far, he is still “hanging around the gin.”

“It will be nice to just get away from the gin for a while, but it really doesn’t seem like I worked there that long,” said Flowers. “I have been fortunate to have a good board that was always easy to deal with so it made working here a pleasure.”

Flowers’ son, Dennis, has been named general manager of the coop. The elder Flowers said it was a natural transition because Dennis has worked for him at the gin for many years. He added it has become a family affair because Dennis’ mother and sister both work at the gin, too, and will continue to work for the coop.

Dennis Flowers said it has been an easy transition to take over the job as general manager since his father’s retirement.

“I’ve been working here for a good while so the job wasn’t just thrown in my lap,” he said. “We’ve known for about a year that my dad was going to retire so it made for an easy transition.”

At the age of 70, Flowers now has some time to relax and rest easy knowing Farmers Cooperative Association of Sudan is in good hands.